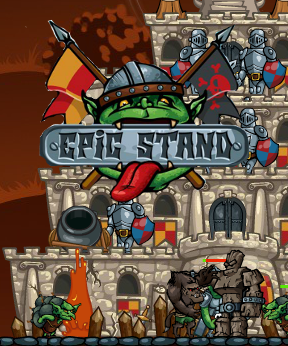 The number of defense games out there is as massive as the hordes of enemies you fight in them, but Bright Sight Team's side view strategy game stands out in the horde's ranks. Epic Stand puts you at the top of your castle as the battle wizard and magic is your only weapon.

To defend your castle walls, click on the screen to where you want the spell to hit and let it work its magic. The level is over when there are no enemies left standing and none of them reach your wizard's final floor. If you pass certain requirements on any level, you gain skull trophies to be used for purchasing upgrades that are both beneficial and fearsome. The upgrades can include new spells (like summoning a dragon or golem), soldiers to defend upper floors, and tower fortifications. The defense of your tower is rather short lived at ten levels, but you have Hard Mode and Survival Mode to keep you in the fight. Epic Stand is a refreshing take on a standard genre that is just as appealing and addicting as its brothers.

Is it me, or do those "werewolves" look more like gorillas?

Yeah! I thought that exact same thing when i first fought them. They even run like gorillas too.

I hate this kind of upgrade system. It usually means I'll hit a wall which makes it seem futile to even bother playing. I much prefer the option to grind lesser stages for a supply of money/points to garner upgrades as it offers hope of eventually overcoming any such walls that present themselves.