From Jay Armstrong, the same guy who brought us Super Adventure Pals and Bearbarians, comes the next big adventure, Epic Time Pirates! Think you already know what to expect from this action arena game? I'll fill you in anyway. It's space pirates who travel through time to fight in an epic battle against zombies, monks, other pirates and more. What else is there to say? Well, okay there is a bit more than just expanding on the title. Apparently Time Pirates just don't plunder stuff in all different time zones. You and your crew are hunting down a foe who is causing time anomalies and putting a stop to it. Usually through death matches, securing crucial control points, and of course a bloody fight, capture-the-flag style. You can unlock new guns and even buy animal companions that give you an added boost. And one of those guns is a shark boomerang. Shark Boomerang. Seriously, what else do you need to hear before hitting that 'Play Now' button. 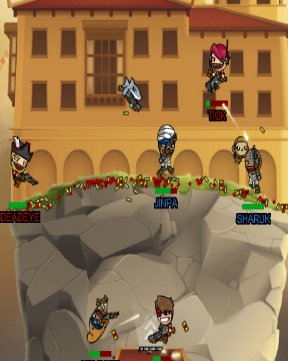 Things have changed in the battle style from Bearbarians. You can still customize your characters and teammates making them your own, but instead of having different classes, it's all about the guns in this game... you are pirates after all. Because of this, the fighting mechanics are much easier as they're now point-and-click. You still have teammates which can make the screen a crazy mass of battle confusion when there are more than two teams in the round, but that's just part of the fun. The A.I. function does quite well, besides the small issue of those holding the enemies' flag still preferring to hang around the fight instead of stepping just a few feet back to turn in the flag. This doesn't make the capture-the-flag rounds impossible, but just stretches them out a bit longer than they would be if you were more aggressive with the flag stealing yourself. Because of the A.I., though, sometimes it feels like losing and wining really isn't in your hands, but at the end you get your little tally of how many times you died and how many others you killed and the feeling of guilt for not helping out enough or the pride of being such a battle master keeps you going on to the next level. Even with its sometimes cheesy storyline Epic Time Pirates keeps what you loved so much about crazy battle arenas so add this on your list of Jay Armstrong games to check out.