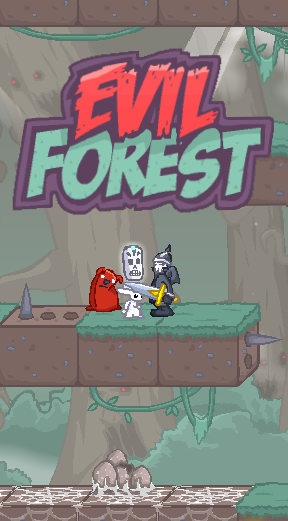 Forests aren't born evil, you know. Their dislike of heroes can usually be traced back to one traumatic event. In this case, it was the arrival of an evil necromancer, who brought the forest with him courtesy of a magic crystal. Naturally, it's up to you to stop both necromancer and forest in Evil Forest, an action RPG platform game from SeethingSwarm.

Use the [arrow] keys for movement, and [A], [S], and [D] for attack, jump, and action respectively. On each level, your goal is to clear out all the monsters, at which point a portal to the next stage appears. There's loot to collect along the way, and you'll need to make sure your character is suitably powerful because in a game with permadeath, you can't risk going up against more powerful foes.

Wait, permadeath? Well, this isn't your typical action RPG, as the game borrows some key elements from roguelikes. Each of the 50 stages is randomly generated, and yes, should your character be overwhelmed by an enemy, you'll be starting the whole game again. With a boss every 10 levels, and few ways to regain health, there are plenty of ways even a wary player might find his character running low on hp. On the plus side, the short, randomized levels mean replayability is rarely a chore, and with plenty of loot to find and nods to games such as Super Meat Boy and The Binding of Isaac throughout the game there's often something new to see on a second attempt.

While merging so many genres seems like overkill, Evil Forest comes together nicely to make for an enjoyable experience. Alone, none of the mechanics stand out as spectacular, and movement especially feels sluggish early on. But the whole is greater than the sum of the parts, and Evil Forest takes enough from each genre to appeal to fans without alienating players used to a different type of game. If you've ever wanted a faster paced roguelike, or hoped for an action RPG that favored skill and planning over grinding and unlimited respawns, Evil Forest is the perfect compromise.

its a very fun game but the one thing that really holds it back are the clunky game mechanics. even while on normal grass the heroe slides quite a bit and overall the movements feel slippery and difficult to control. this makes the game frustrating more than anything else and hope that it is tweaked in the near future.

Apep the Personification of Evil

This could be a much more enjoyable game if they polished a few things. The controls are sloppy and frustrating, at least until you get a few upgrades. The first boss is just plain annoying if you don't have wings, making it better to just restart than try to slug your way through it.

The best was when I got to level 19 and paused to get the info on an item I had found. When I went to resume my game, my character disappeared from the screen and was forced to quit.

Are the controls really slow and sluggish, or is it my computer choking on itself again? On my comp, the whole game plays like its mired in pudding - is that the way its supposed to play?

It was quick and snappy on my work computer, but on my (older) home laptop, everything is so sluggish as to make the game unplayable. Maybe this game just requires some horsepower.

I was cute and fun, but not very balanced, if you're unlucky and don't get a good waepon/armor by level 20, the boss will eat you alive.

The game is great, I really didn't mind the sluggish controls. However, I was forced to quit my game twice. The first time, the teleport block teleported me into the ground and my character "fell" off the screen. The second time, all of the monsters were defeated but a portal didn't spawn. Otherwise, it's a game I would replay.

I don't know why no one mentioned this yet but:

I believe that other than the Rebirth, the Entrance Portal is is another great item. Allowing you to teleport back to the entrance without losing items and stats, this item gives the player more time to get better items, more money, and build up stats. Imagine if it was used right before the final boss....

I had a really easy time with the first boss honestly,

Wow, did I get lucky on my second run through. (First time, I died right after the first boss.) Here's what I got:

The first weapon I found was the Skull Staff. Great damage, and a chance to cast Pestilence every time you attack. Granted, it doesn't happen terribly often, but it deals 16 damage to everything on the screen multiple times. No other weapon I saw even came close. Several levels when I was low on health (and on a couple of bosses), I'd just sit in a corner and attack until Pestilence hit and cleared the screen for me.

I picked up some Salt before the first boss, which gave me a nice place to stand between jumps while killing swarms(though Pestilence did a number on the hive).

Soon after, I got the Four Leaf Clover and Thief's Outfit, which ups your stats and makes you immune to spider webs and goo. Very, very handy. Again, I never saw other armor that tempted me to switch. Spiders (and spider boss) are a joke.

I used a Magic Ticket to jump ahead to Louhri right after Big Spider. From then on, it was all coasting. By the last 15 levels or so, I could fly with Demon Wings; had increased all my stats with items; picked up Pixie Dust, Amethyst, and Triquetra; and had a friendly Meat Dog.

Needless to say, I felt pretty invincible. I kept saying things like, "You dare challenge almighty Pesitlence?!" and, "A single bag of gold? Is this the best tribute you could bring your master?"

Fun game for sure, but the luck of the draw makes all the difference here.

I loved the variety of items and upgrades. They managed to give the game a free-wheeling nethack like feel, though without any of the sandbox elements or the depth that let nethack players counteract bad luck with item drops.

I agree that the controls are a major problem, though. I was injured many times because I tried to turn around and attack a monster behind me, only to have my character start walking backwards instead. Changing directions when jumping created similar problems. Also, the base movement speed is slow enough that having end-of-level items spawn at random points around the level just seems mean. It's not fun to spend an extra 15 seconds walking back over the level I just beat to pick up 2 or 3 more gold.

Well, I was on my *third* trip through thanks to 2 well placed Rebirths, and I really was just rolling through nigh invincible, when my character went and ran off the bottom of the screen. I could cast spells (but not see them), and I had no way to get back on the screen even though I could fly. If only I had a shopping list, ghost, or Rebirths, but alas!

Certainly a good lesson in hubris. It really is a fun game, despite that soul-crushing incident.

The biggest help for this was without a doubt

the Demon Wings, once I had those even the bosses were a pretty easy, that said i did get a few other upgrades on the way but for me those wings were the clincher, I would almost say they were overpowered and pretty much made every encounter a bit trivial