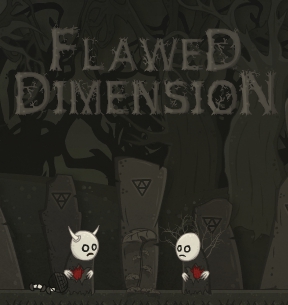 You know, the more time passes, the more apparent it becomes that our parents were trying to kill us with nursery rhymes. A lot of us were taught as kids that if we went into the woods we'd see some stuffed animals having a picnic, but it turns out that going into the forest is a one-way ticket to Cursed Monstrosity-ville. We're on to you, Mom and Dad. In Black Square's morbid puzzle platformer Flawed Dimension, from 2PlayerGames, two kids out for a stroll suddenly find themselves twisted into monsters with different abilities, then merged together. One can spit out seeds that sprout platforms, and the other can hurl bone darts at enemies. As awesome as this might be at parties, it's probably a good way to get chased with pitchforks and torches anywhere else, so they set out to find a solution to their unique problem. Use the [WASD] or [arrow] keys to move, [X] or [L] to use your special ability, and [Z] or [K] to reincarnate so you can swap between characters. Keep an eye on the heart that represents your health in the upper-left corner, and grab any hearts you see to replenish it, since if you die you'll start back at the beginning of the stage you're playing. Since the game offers three difficulty settings, which is kind of a welcome surprise, you can make it as easy or as hard as you want.

Flawed Dimension's main, uh, flaw, is that its gameplay is relatively straightforward. The platforming feels simplistic, especially with the ability to only attack in a fixed line, and it doesn't take advantage of its core concept of different characters with different abilities in any way that really makes it feel significant or creative. Which is a shame, since the striking visual design and off-beat idea of cursed and twisted protagonists is one you'd love to see revisited and expanded. The end result is a game with a great sense of style that serves to deliver a slightly dark platformer that fails to really break free of its standard gameplay, but should scratch that itch for all the reality-warping, Tim Burton-esque platforming action you need in one small package.