Bored with running games such as Canabalt and Robot Unicorn Attack? You should be, because they don't have giant squids, lava, lightning, oil slicks, and main characters who are on fire. Flood Runner 3: Armageddon, however, does. We mentioned Clockwork Monster's Flood Runner 2 in a previous Link Dump Friday, and this one's got even more over-the-top action to help you feel like a demi-god dashing through the mortal realms.

If you're looking for a simple "press a button to do one thing and keep doing that until you die" experience, you'll find Flood Runner 3 a bit more... interesting. You can move left and right, and jumping is naturally very important. You also have a health bar to occasionally keep an eye on, as well as a glide bar that determines how long you can hover in the air. There's even a speedometer in the corner of the screen! Even though all of these bars and meters litter the playing field, your eyes will always stay focused on the action at hand. Everything else just sort of takes care of itself, adding a touch of complexity to the game without cluttering things up.

Flood Runner 3 takes place in a three-tiered world: clouds, land, and sea, each filled with things like trampolines, oil slicks, wind tunnels, enemies, and more. You start off on land, in the middle, and hop from platform to platform. A wave of lava is always behind you, encouraging you to, you know, not touch it. If you fall below you'll hit the sea; climb higher and you'll run in the clouds. Naturally, you'll want to stay as high as possible so you can stay alive longer. Dip into the water at the very bottom of the levels and you'll encounter a big evil baddie. Be quick, hit the buttons in the right order, and you can punch giant sea monsters and live to run and jump another day! 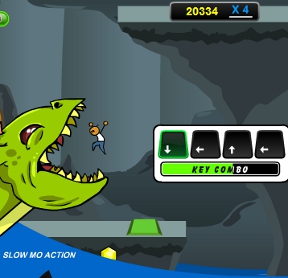 Analysis: Flood Runner 3 plays on the "all-powerful" feeling games like Caster 2 invoke. You can run, you can jump, you can glide, you can even punch sea serpents and light yourself on fire. While the sense of all-powerfulness is there, you're still almost as vulnerable as you are in any running game. True, you can climb higher, fall further, and absorb much more punishment than, say, BIT.TRIP RUNNER, but you're not quite invincible, just enough to activate that risk-reward center in your brain.

Despite its plethora of neat-o features, Flood Runner 3 falls a bit flat after playing it a few times in a row. Being Superman and flying through the clouds is awesome, but naturally it loses some of its pizazz the tenth time through. The difficulty also seems uneven, as some sessions will be a breeze, while others will tax your keyboard skills from moment to moment. Most of these fallbacks are common to the fast-paced running genre, as the path you take is never the same, resulting in very different experiences each time you play.

The game has been through some great improvements since the first two. I like the use of "life savers" and the superman power-up (complete with a familiar background music once obtained).

Agreed, much improved and a more diverse experience all around than previous installments.

I thought a score of 779,775 on my second try was pretty good, until I saw the high scores in the billions and trillions. I don't care, I am still awesome.

...To be honest, this game is easy and it got boring on my first run. It's VERY easy to perform the QTEs to beat monsters, Superman and the dragon break the game (in the sense that it makes the game WAY too easy when you get them,) and glide is fairly easy to pull off. The bog flies are annoying but not much else.

It's impossible to die without trying. Because of this...2/5.

Yeah, this game is far too easy. It's less stylish, the "flood" feels anemic, and your score is only limited by your patience. And it doesn't even get harder!

Flood Runner 2 was the better game. By far.

Absolutely ace - quite addictive too!

How do you get more lifesavers? I never quite understood that. For doing new things or almost dieing? I don't know.

It doesn't matter, except that it is an achievement.