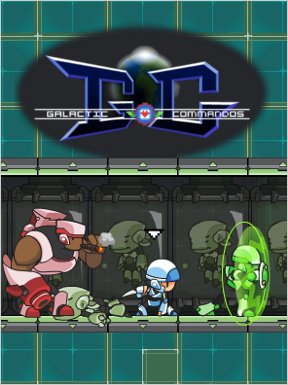 The future is awesome! Cats and dogs play together, nobody ever gets sick, wars are a thing of the past and everyone who wants a pony gets one. There is absolutely nothing ever that can go wrong. Ever. Unless "ever" happens to get interrupted by the landing of a hostile alien ship. That's why we keep these Galactic Commandos around.

The Galactic Commandos are a paramilitary trio that get called in to do the dirty work like fighting off bad guys while the rest of us lounge about eating mint chip ice cream and riding ponies. In this action/puzzle platformer you control all three unique future soldiers. There's your cigar-smoking heavy weapon specialist who can launch explosive rockets and perform a seriously destructive ground pound. There's your defense specialist who fires a pea shooter and totes an impenetrable energy shield. Last but not least there's your stealthy scout, capable of double jumps, balancing on narrow platforms, and sliding unnoticed past enemies to stab them in the back with his ninja-like sword.

Control of your assault team can employ two different control sets. You can move, duck and jump using either [WASD] or the [arrow] keys (it is recommended for IE users to use the [WASD] configuration, as the [arrow] keys will scroll your browser along with controlling your characters). Cycle back and forth between your characters using [<] and [>], or [C] and [V]. Each character can also attack using [N] or [Z], while the [M] or [X] keys activate that character's special ability.

With this highly trained team at your fingertips, you must infiltrate the alien craft and nullify the threat so the rest of us can continue to enjoy our ice cream and ponies. And by "nullify the threat" I do mean blow the thing to smithereens.

Analysis: Take the Lost Vikings and Megaman and kind of smoosh them together real nice and you have a pretty fair idea of what Galactic Commandos is like. You get the puzzle aspect from the former, but with a nice bit of futuristic action from the latter. 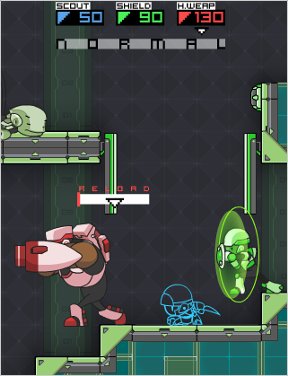 On the whole, Galactic Commandos is a nicely executed game. It's visually clean, employing a nice cartoony future motif backed up by an upbeat, chipper soundtrack. The only way to really describe the overall effect is Megaman-like.

While the controls are not exactly airtight they do get the job done, and actually manage to help give the different characters personality. The scout's light and speedy feel contrasts beautifully with the sluggish heavy artillery expert.

The balance between the three characters is impressive and after the opening few levels you really do need to use all of their different abilities to see your way to the end of each level. It's also quite nice to know that inactive units are rarely in trouble, since they all rest in a safe state. The scout becomes invisible, the defense character keeps his shield activated, and the heavy artillery specialist automatically fires his rocket launcher (when he's not puffing at a cigar mind you).

Galactic Commandos does suffer from its flaws, chief among them being rather uninspired level design. Unfortunately, the level design doesn't allow the player to take full advantage of the three-character dynamic. There was the potential here to create a game that really made you think about how to make it through each level. As it stands, this aspect of the game never really provides much of a challenge. Indeed, Galactic Commandoes overall is not that hard, and shouldn't give most of you much trouble. On the positive side, the lack of challenge makes this action/puzzle platformer an extremely casual experience.

The less-than-amazing level design also results in a tendency towards repetition. Perhaps being able to upgrade old abilities or gain new ones later in the game could have spiced things up a bit, but as it stands, it totters dangerously between good action packed fun, and tedium.

Still, Galactic Commandoes remains a light romp that may not put your skills to the test, but manages to hit the fun button all the same.

Good platformer, could use a controls upgrade. Great concept, but would be even better if you could have the other two characters moving with the one character you currently have. I found switching characters and slowly leading them to the end to be a bit annoying. Also, it would be great if offline, or even more so online multiplayer were added for the possible sequel.

I was at the beginning of the 3rd level when I switched to the blue guy, moved him all the way right on the platform, and then switched to red and did the downward smash. Somehow this resulted in my blue guy being transported to just above the screen (I could see his feet). I moved him left in an attempt to get him to join the others, but he just sort of fell off the screen. I then stopped playing to do more productive things (by which I mean, type this comment).

Okay, I'm not one to post excessively negative comments. But I hate this so far. Is it possible to disable the INSANELY ANNOYING help screens that pop up right over the action so you can't see what the freak you're doing? Do they go away in later levels? Because if not, there's no way I'm giving this another chance. I've never encountered something so incredibly stupid before.

Why is the bruiser wearing pink? It's a guy, right?

The help screens do go away, when there's no new info needed for the level.

I guess pink is light red, and his color is actually red.

The controls are cramped and they dont allow you to customize

The lack of a Quality Control ability is stupid

I got to the boss fight.. and err.. died. Repetitively. x.x;

Until I finally understood how to go about beating the thing. Good game over all. Liked it, liked how the big guy was slower than the other two just for that reason, he was bulkier so he couldn't get around as well.

Controls not so bad as far as I'm concerned though a bit slow to respond at times.

Sorry for the double.

Found the controls hard to handle, but otherwise it was probably okay once you got past all the tutorials.

Worth noting is that I believe this was done by the guy who did Darkness 1-3, Tomb Of Doom, Invasion Of The Space Invaders From Outer Space, Straw Hat Samurai 1-2.

Somehow I planted a bomb on Stage 1. I pressed S right near the top of the stairs, and I got "Bombs Planted: 1/0".

This is great. Artwork is lovely. I really wanted more levels though. Too many training levels at the start and just as when I was getting into it, oh, it's over.

Really enjoyable though - wish all platform puzzle games were this polished.

Hope they add more levels or do another version.

This is great. Artwork is lovely. I really wanted more levels though. Too many training levels at the start and just as when I was getting into it, oh, it's over.

Really enjoyable though - wish all platform puzzle games were this polished.

Hope they add more levels or do another version.

When I saw the picture I was like "Oh what, did the lost vikings become even more futuristic? Wasn't LW2 enough? Oh wait yea, this isn't actually them, but darn well seems like it." I haven't tried it yet, and probably won't today ('cause I'm sick and about to fall asleep while writing this >_>), but at least it seems like a decent game judging by the other comments.

Characters could be more agile, or at least when you've beat the level. Hated dragging the slow ones around.. com'on.. please move.

The boss wasn't very challenging either. (actually none of the levels were)

Has promise (love the graphics), but controls need to be improved

This reminds me a lot of a game from a while back played with snow men. Each snow man had a different ability and you had to use them all in the correct sequence to complete a level, and that game seemed to be better designed.

hehe nice glitch billy. that could come in handy...
loved the the game thou it could've been better.
oh well :)

The boss was hard because you had to guess at how to kill him. I didn't like that the ninja was totally worthless in the fight, though- he just kinda sat there while Green shielded and Red shot the boss whenever he charged me.

Other than that little nitpick, nice game. Too easy and too short, but fun. I amused myself by trying to use the ninja to kill as many as possible before the game forced me to rocket or pew-pew something. I love that little guy :)

I also like that you really had to think about moving missile-guy (I like to think his name is Jerome) around the level. His missiles were invaluable in places, but the guy has no jumps and he's super slow.

Here some hints for the boss fight:

The boss is only vulnerable, when his mouth is open. This happens when he shoots out a bolt (timing required for this one), charges across the floor level, moves very fast around the wall (happens after he got hit, best to hit him with the heavy guy's stomp attack in the floor) or repairs himself on the ceiling (jump up with the scout for several safe hits with the knife)

Correction, for the "glitch" I posted above, you only do a single jump. Double jumping doesn't work

I enjoyed this one a lot as I was a fan of lost vikings. The only thing I'd change is if you get one of your characters to the end and there are no more enemies to present a challenge then just end the level at that point. Anything more past that point is just pointless (IMHO) and frankly a bit annoying. That's the only 'smudge' I can offer for this otherwise fun game.