Apparently, becoming a big, scary demon takes a great deal of agility. Or at least that's what you learn when you play Ghostly Me, an action platformer by Ppllaayy. See, you are a little, innocent-looking ghost, and you want to climb the ladder of hellish hierarchy and become evil and important. To achieve this, you won't abduct fair maidens, frighten burly adventurers with your eerie presence, or even hide under children's beds. No, instead you'll jump your way through levels in which pixellated lines, hoops and hammers try to end your demonic career. 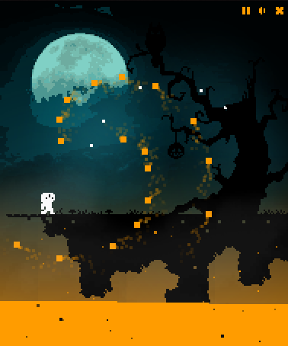 You use the [arrow] or [WASD] keys to move. At first, the levels are simple enough: you are supposed to reach a portal somewhere to the right, which will then take you to the next level. If you fall into the water (or better, vividly coloured ghost-melting acid), you die. You must also steer clear of any formations made of rotating little squares which, alas, tend to be placed in your way. So you jump over them and run under them, sometimes with the help of a "slow time" effect, which lasts as long as you hold down the [spacebar]. You can also make the pixel formations disappear by using your own lines to intercept them. In many levels you'll find tiny white squares which you can pick up. They form a trail behind you, and you can use that trail to remove your obstacles. This is still much trickier than it sounds, since you're forced to juggle moving, avoiding and deliberately approaching the pixel lines to destroy them, so the checkpoints will come in handy. 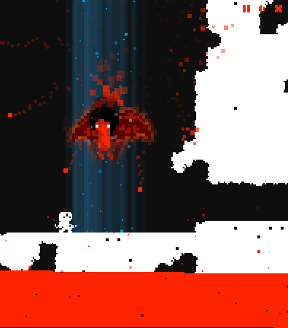 Ghostly Me lets you think it's easy peasy. The first few levels are simple enough. You're doing great, you're going to be a wonderful demon, these feeble hurdles are no match for you. The difficulty rises slowly, as does the number of tries needed to pass a level, and you might find yourself shouting at the screen. All the effort does pay off, though, because the stages are very interesting and varied, as well as short enough to make you feel like a real wuss if you quit. The graphics are surprisingly beautiful, dark and colourful at the same time. Music is often a weak point in games like this, but Ghostly Me delivers an unobtrusive, mild background melody which doesn't get boring. The only disappointing feature is the story, which is virtually non-existent. There is a demonic voice talking to our little ghost from time to time, but it doesn't build towards anything substantial.

Ghostly Me is the nice kind of platformer, the one that nudges you along, instead of making you rage-quit. It can take more than an hour to finish, depending on your skills, but you always see the solution, so it's only a matter of time before you beat a level. So arm yourself with a bit of patience and help a ghost become...um... the prince of darkness. Being the good guy is old-fashioned anyway.

Here's what I did:


You're supposed to jump on him, and you can do that from above or from below him. The number that appears when you touch him is the damage, so the bigger the number, the better. You'll get the best results if you jump from a big distance, and quite fast (my greatest damage dealt was 7 or 8 thousand), and I did that by jumping up from the left side of the stream of light, then falling quickly outside of the stream, then jumping up the stream again, so it's sort of a circular motion. It sounds a bit complicated, and you might have your own strategy, but the main thing to remember is jump high, jump fast, avoid fire balls :).

To beat the devils:

Shoot up through the light and then move out of it once you hit the top to land on it. He'll usually follow you, so you don't really need to worry about aiming. At one point I did 11k damage. Avoid the fireballs by hiding underneath the ledge thing next to the first beam of light, that way when it shoots them the fireballs are negated by the stone environment, so you don't have to worry about dodging them. Rinse and repeat.

I would have loved this game to have some graphical or narrative pay-off in the end. The puzzles were definitely fun though, and it was largely a very cute game.