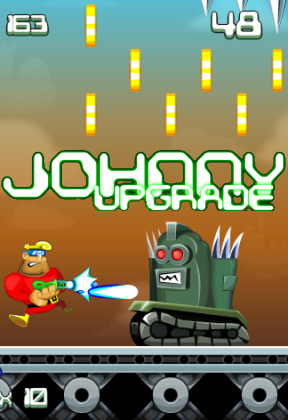 With only a 3 second timer, use [A] to run left and [D] to... time's up! Back to the upgrade store. May we recommend you take a couple of timer upgrades and some coin multipliers with you this time? That's better. As far as superheros go, Johnny Upgrade doesn't start with much. Gameshot's cartoony stab at the 'upgrade everything' genre gives you... well, a 3 second timer, and nothing else. Grab all the coins you can in those few seconds and you'll be given a chance to spend your hard earned money on anything from a double jump to ammo and power-ups for Johnny's gun, although you'll probably want to start by buying the ability to walk. The gun itself is lost somewhere in the bright, colorful level ahead of you, and while it's helpful against the occasional spiky robot, it's really for what lurks at the end of the level: a powerful flying behemoth of a boss.

Even with a weapon, it will take a few more trips to the store before Johnny is powerful enough to knock his nemesis out of the sky. Of course, without the upgrade system, the lone boss wouldn't take long to topple at all, and the game would be very short, though well presented. But unlike Upgrade Completer, Johnny Upgrade plays it straight, with every upgrade helping you progress through previously impassable areas, and there's something compelling about gradually making progress in this way. Simple but engaging, Johnny Upgrade is a little treat for platforming fans, or anyone who really likes upgrades.

I was kind of hoping someone else would mention it before now... but I think perhaps you need to learn how to attach pictures to your reviews, or at least preview them before posting. Don't get me wrong, I love reading well written reviews as much as the next guy/gal/combo... but to be honest, most of the time I just look at the picture, decide if it's pretty or not and then play. Then read the review after. A short attention span is one of the main reasons I like casual gaming. And baubles.

[Thanks for pointing this out. Seems the image was not showing up in IE browsers only, which is how it slipped past us. It should be fixed now. -Jay]

Is there a way to defeat the boss? I have all the items at max and even spend my 20 shots on boss never gets die.

Avoid his shots until he gets mad and slams on the ground, then you can shoot him. It takes 5 shots with everything maxed.

I think the rating for this game is a little off, considering your character explodes in a bone and organy mess when you die.
This game should at least be rated y.

It's been a week or two since I played this one, but I believe that at the very start of the game you don't even have the ability to walk: you have to die the first time and then go to the store and buy it. I think that's kind of a clever touch, actually.

An oddity: I tried Continuing after beating the boss. The game no longer recognized my key presses.

Music playing through the game- "Yeah, this is okay."
Music fighting the boss- "OH SNAP TURN DAT UP DIS MY JAM"

Good solid fun. I like how silly it is at the start, and the natural progression through to the scary boss, wondering how to possibly beat him, and figuring it out. Even a few little mini-secrets to find. I like it.

3,525 Views
5 Comments
chrpa— Jayisgames needs your help to continue providing quality content. Click for details Rinnogogo left you astray in a small train station. All alone, you wander around not knowing what to do - you can't leave the station because there isn't...  ...