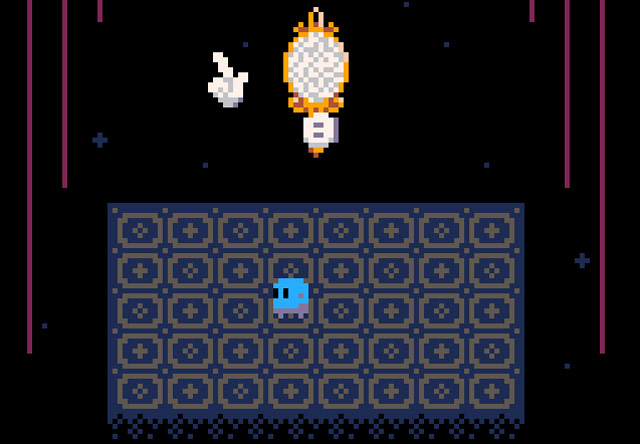 Step right up, ladies and gentlemen, boys and girls! You're on a small 5x8 platform and a magical mirror has appeared, beckoning you to battle. Your opponent fancies himself as a magician, no wait, the ringmaster of the show. He's got all sorts of tricks up his sleeve as well - he can make flowers spring up on random tiles. Remember that saying about every rose having a thorn? There are going to be plenty in your side if you don't manage to dodge the spots. Next, pick a card, any card-ouch! Don't let their sharp corners stab you and deplete your health. Finally, he'll flip coins down onto your arena, limiting your already cramped space further.

How do you hope to defeat the one and only unnamed star of this game? You must collect glowing tiles within the playing area by stepping on top of them. You can't miss them, so just be patient until they appear. The only controls you need know is arrow keys to maneuver around the board and avoid potential hazards. You start with 4 "hearts" so you can be hit a few times before you're down for the count. Periodically, a heart will appear on the board to replenish a bit of your health. Later on, you'll have to cope with being cloned, and in the process, having to keep your mirror image safe from harm as well. Good luck, and remember...it's just one boss!

Played through the game normally, got through after a bit without too much trouble. Then I got to the double character stages in hard mode. I'm about 90 percent sure those stages are physically impossible to complete, mostly due to the controls.

Multiplayer Computer Games For Fans of The Apocalypse

1,057 Views
0 Comments
jayisgames.com— The world has changed and large gatherings have been avoided for quite some time now. It is understood that people are cautious about physical meetups due to the hazard of being exposed to the COVID-19 virus, even with the mass...  ...

2,674 Views
3 Comments
chrpa— Jayisgames needs your help to continue providing quality content. Click for details The escape by DamZakk - apart from being imaginative, original and quality game - educates you in traditional Indonesian batik patterns. It's just a side theme, though,...  ...

2,284 Views
0 Comments
chrpa— Jayisgames needs your help to continue providing quality content. Click for details Welcome to Weekday Puzzle! This week WP presents two puzzlers, one platformer and one reaction game as a bonus. Both puzzlers - by havana24 and Kultisti are...  ...

3,761 Views
24 Comments
chrpa— Jayisgames needs your help to continue providing quality content. Click for details Hi! The week is over, the Weekday Escape here!! First two games - by New Generation Sustanable Energy Poltergeist and by midori are short but good and...  ...