Kero Blaster has arrived! The sidescrolling platform shooter by Studio Pixel looks simple and sweet on the surface, but the difficulty is cranked up high enough to give your reflexes an honest workout. As janitor for the teleporter manufacturer Cat & Frog, your job is to venture out into the dangerous world to fix the company's broken machines. No sweeping or actual repairing involved, just shooting and trying to stay alive! 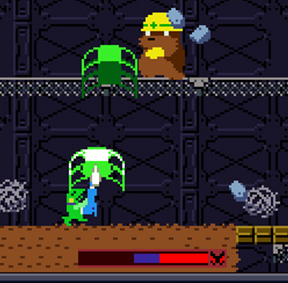 You unlock four different weapons over the course of play in Kero Blaster, each of which can be upgraded in the game's shop. Sometimes an upgrade is a simple range boost, but other times it turns the beam into a laser, which we all know is far more useful in combat situations. Defeating enemies earns you coins, as does sniffing out secret areas, so even though the enemies come in swarms and can be a pain, it's always best to clear the screen before moving on. Besides, since the levels are linear, what else are you gonna do? Boss battles punctuate the end of each stage. They're just difficult enough to give you a challenge without being frustrating.

There isn't a demo for Kero Blaster, but the teaser game Pink Hour is available to download for free if you want to get a feel for the big release.

(and yes I know its by the same person)