Kit and the Octopod 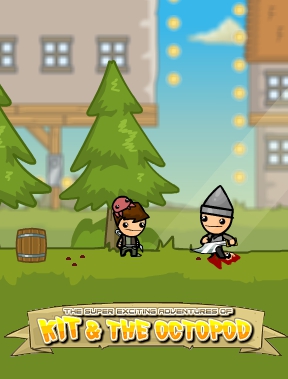 No matter how cynical and jaded you are, it's hard not to be heart-warmed by the simple companionship of a boy and his octopus... especially when the boy is willing to help rescue the octopodess of his pet's dreams from the evil kidnapping clutches of knights, archers and the dreaded Bad Mood Bear. With a wrench at Kit's side and a ready-to-be flung mollusc on his head, though, it'll be easy as octo-pie, right?... Right? Jay Armstrong's Kit and the Octopod may sound like a silver age crime-fighting team, but it has a ton of charm to go along with its action-platforming.

You move Kit with the [arrow] keys and jump with [S]. When you come upon a wall, hold [up] to run up it, and [left] or [right] to jump off in that direction. Tap [A] to show off your karate skills and hold it a bit longer to whip out your trusty wrench for a more serious beatdown, just the perfect thing for bashing open treasure chests and flinging chickens into their nest. [D] throws the octopod, which can hit switches and troll enemies by clinging to their faces. Don't worry, he'll make his way back to you in due time.

Kit and the Octopod is an action-packed romp that has the charm of Mario, the bloody edge of Castle Crashers, and cephalopods aplenty. Its biggest flaw comes in the finickiness of the wall-running mechanic. The author, Jay Armstrong, promises an update soon that should make wall running and jumping easier. At the moment, it's more likely that miss-timed controls will do more damage to your Kit than any of the enemies will. The strange thing is that this game would be perfect if it had a double-jump mechanic. That may be a matter of personal opinion, though. In any case, Kit and the Octopus is some good stuff that'll make you nostalgic for the golden age of the NES.

Play Kit and the Octopod

Ugh, I can't get the first chicken as soon as you get in the first(?) castle.

Anyone got it? It just seems like the nest is too far to hit it up there.

Fun game, but glitchy as bananas.

I've glitched through the scenery several times, and the second boss somehow ended up invulnerable to my attacks, leaving me with no choice but to commit suicide by worm.

When fighting captains (and apparently worms) The animation of the captain peeling off the octopod can get glitched to the point where he acts normal, but he grows invulnerable.

I managed to get passed this by pressing d until the octopod respawned above my head, allowing the guard's animation to be reset.

Also using the *Bonus* mode, I was able to no-clip into areas that i shouldn't have been able to go. e.g. behind the screen on the right side of the level with the 2 hostages blocked by the roofward button...you know that one...

Overall, fine game. levels are a bit short for my taste though.

I find no bugs other than a wall in the ice world was passable. Though the game did feel edgy with the controls (who else feels a to jump and s to attack?), the archers power to fling you is totally frustrating for many reasons (down gaps, into spikes, into other enemies).
I found the game playable until the end, I'm using Google Chrome, Windows Vista.

I found another glitch with that level before Bear's Castle.I managed to hit the door button,but i glitched and somehow end up stuck in the stone wall.Quite a glitchy game,althrough its really good.

If you hold [s] while wall running, you can wall run forever. I don't know if you are supposed to be able to do that, but it made some wall climbing sections really easy because I didn't have to jump back and forth between the walls.

when you change your characters skin color his arm stays white, so I had a brown faced dude with shock white arms lol

At the end you have the choice of

forgiving the bear or not. I did and we became best friends! Did anyone try the other option?

Also, if you finish the game

You unlock the Pirate mode with a parrot !

you take his castle and it says "how rude"

I suffered all the aforementioned bugs. Note to developers: Play your games before you release them. There *might* be bugs.

One minor complaint: If you face a lot of enemies and get hit once, they get an infinity combo on you until you die. Might as well make it a one hit death. That way you don't have to sit and watch your health tick down.

Other than those issues (didn't affect the game much) it was fun playthrough.

How do you finish the worm at the end in the bear arena? He has no health anymore and still is alive! Have being fighting 20 minutes now against the worm with an empty health bar and can't figure out how tho finish it -.-

The game glitched. Let the worm get a nice meal from your corpse.

Another problem: if you're standing still and you tap a key to step left, sometimes you move right instead and vice versa.

Awesome game, but in the level Outer Lands, The first Abyss, I tried to climb up it but suddenly I was stuck inside the ground and the octopod was out side trying to follow me! LOL! How funny!

On the third level my character is stuck changing between all the possible character outfits (boy, girl, pirate, and multiple hair and skin tones) and doesn't move forward.

fun game, enjoyed it, i finished the game, forgive the bear, and started again in pirate mode, haha

i found putting chickens in their nests so difficult .. i didn't botter with that