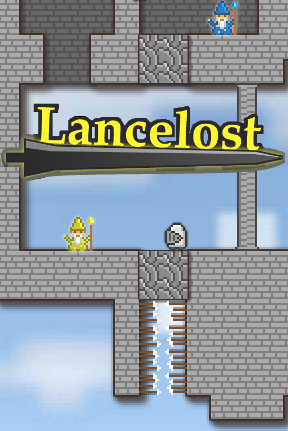 Everyone saw the Queen of England jump out of a helicopter to open the 2012 Olympics. Royalty are awesome. But her eventual successor will be chosen simply by birth order, whereas in Lancelost, a retro platform game by Stefan Langeder, the king has decided that whichever of his sons has the biggest lance will take the throne.

As it happens, you have the biggest lance. But your evil brother, jealous of the size of your weapon, has hidden it somewhere in a castle full of bottomless pits, spikes, wizards and other assorted goodies and traps. Make your way to the exit on each level using the [arrow] keys to move and jump, collecting coins as you go. Along the way, press [Down] to interact with wizards to be granted essential temporary powers including super speed and flight.

Lancelost spans 40 levels but the pace of the puzzles and gameplay mean it never drags. Levels are short, and generous with checkpoints, and new mechanics are regularly added to the mix. The result is a fine puzzle platformer, and if you complete it, an entire country to rule. Although I'd recommend moving to a less dangerous castle.

Sometimes when I hit �continue� it takes me back to the first level.

It once marked that I had collected all the coins in a level when I know I left at least three.

Am I missing something? I got to level 4, in it there's a mage that gives me shield and an impossible jump to make.

Diego, your mage should be giving you a choice of abilities at that point. Jump or Shield.

Pretty nice game, not too complex and enough achievements/cups/coins to collect to hold your attention for a while.

Controls are a pain though. Response is slow at best, but especially the jump is crappy: when you stand right up against a wall, jump won't work; sometimes there's delays of up to half a second for it to launch the knight.

All in all: nice idea, mediocre delivery.

Diego, yaddab: It's not giving me a choice, either. The only ability I can select from that wizard is the shield. Cute game, but buggy.

I also like the cutesy style but the controls are extremely unresponsive, especially when it comes to jumping. Which is kind of a big deal in a platformer.

Managed to get it working with Firefox (tried in chrome before). Not only the mages wasn't giving me options as it gave my fly in the second level.

Anyway, finished it! It's a pretty neat game :) fun and challenging (in the casual context)

A fun game, not too difficult, not too easy either.

The only thing I'm missing is a button to go back to level select after finishing a level.

It keeps sending me back to Level 1 for no reason.

the shield in level 3 doesn't seem to last long enough the get the key and back out; any tips?