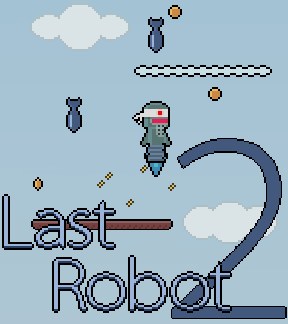 If history has taught us anything, it's that robots want a lot of goodies. In Last Robot 2, an arcade action platformer by Karma Team, a greedy bouncing machine is willing to soar to astronomical heights to get what it wants: gold coins and a special space treat!

Using the [arrow] keys to navigate the automaton astronaut, you'll have to avoid bombs, collect coins, and purchase upgrades to make it all the way to the top. It's a long way to deep space, but fortunately for you there are plenty of collectable hearts to refill your health bar and lightning bolts to refuel your engine. Reminiscent of the iOS action title Doodle Jump, this simple game is quick and easy to beat, but incredibly hard to put down. The rapid ascent and avoidance based gameplay keep the pace fast enough to prevent the constant climb from becoming dull, despite its repetitive nature. With a sizable bundle of achievements and upgrades, there's plenty of replay value and a whole lot of fun combined in a bite-size package. That's one small hop for robots, one giant leap for machine-kind.

Sometimes platforms would not be recognized as there. not even just the disappearing ones, the red ones would occasionally not be solid, and i would die. otherwise, great game.

I love this game. Simple, fun, and a wonderful ending.

Shouldn't there be a Last Robot 1 or something?

Meh. Maybe 15 minutes (13 "days" in-game) to achieve all achieveables and purchase all purchaseables. The difficulty curve seemed kind of flat, with respect to altitude - the first few days were ended by simple unreachable distances between platforms, but after buying even one level of engine, the rest of the "game" was just coin-collection - and the magnets even took the challenge out of that. As you get higher, the platforms get smaller, but that didn't manage to make the game significantly more challenging as you got higher.

Overall, I found this kind of bland and unfulfilling - easy to get into, yes, but no challenge or meaningful variety. Catchy music, though, I will admit.