Look at you. Sitting there. All bright and brimming with the potential for limitless possibilities. Imagine if you got up, right now, and did something. What, you ask? Who knows! That's the whole point. You have within you the endless capacity for wonder and brilliance that means with a little bit of productivity, energy, and application, you could create something that endures long after you're gone, or changes the lives of countless people. So allow me to ruin that with a series of addictive games that will have the day flying by in a wave of glassy-eyed self-indulgence and electronic entertainment before you can accomplish anything. You're welcome! (And you can tell Loki I said that's how you take over the world.) 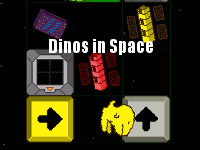 Nature Finds a Way... For Prizes! If we ever need to get depressed and reminds ourselves how vastly more intelligent you guys are, all we need to do is post a review for a logic puzzle programming game and watch the brainiacs come crawling out of the woodwork. (Remember Manufactoria? You guys are MACHINES.) Well, here's your chance to win another opportunity to train your brain through entertainment! Dinos in Space is a great indie programming puzzle for PC and Mac with a sense of humour, and all you have to do to win one of five free copies is leave a comment on this article telling us what your favourite logic puzzle game is and why. Rules: Entries must be submitted by June 15th, 11:59 p.m. EST (GMT-5). Winners will be notified by e-mail shortly thereafter. Winners are selected randomly. One entry per person only. You must be at least 13 years of age or older to enter. No purchase necessary. Void where prohibited. 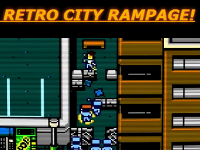 I HEARD YOU LIEK OLD-SKOOL Yes, that was a Mudkip reference... I'm playing Emerald again, deal with it! If you love nostalgia and grew up with what the kids these days are calling retro games, you might want to turn your peepers to the upcoming Retro City Rampage by Vblank Entertainment due out later this year for Windows and consoles. The game claims to be a parody of open-world action gaming in an 8-Bit experience, and packs a goofy crime-ridden story where you're out to stop the EVIL GOOD GUYS (yes, all caps) from ruining your beloved Theftropolis City. With driving, shooting, and tons of pop-culture references to boot, all in one gloriously authentic old-school package, it looks like this game might be gunning for your free time in a serious way. You can even pre-order it from Good Old Games or the official site. Honestly, who doesn't love beating up tiny defenseless civilians and stealing tanks? 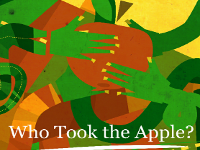 What is This "Real World" You Speak Of? When was the last time you played outside, with real people you liked and physical objects? Well, if you're a grown up, you should check out the free four-player card game by the Copenhagen Game Collective Who Took the Apple? All you need is an apple, a bucket, four beers, and three other people besides yourself. And to download and print out the free .pdf, of course. The rules are simple; players take cards with actions on them that will, eventually, lead to someone taking the apple and winning... though since the game is played backwards, it might take some doing. It's a silly, fun game perfect for a lazy, hot afternoon with friends, and might I recommend using your favourite bottles of soda if you're too young to drink? 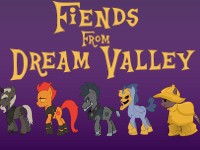 The World's Shiftiest Looking Ponies Wish you could take your favourite ponies on a really epic adventure? Then be sure to keep your eye on The Fiends From Dream Valley, an upcoming side-scrolling platform action adventure. When several strange ponies show up at an event for Princess Celestia, things go very wrong and Twilight Sparkle wakes up on the edge of the Everfree Forest. There's a playable Flash demo on the official site, but for the full experience and some remarkably professional-sounding voice acting, you should probably download the demo since sounds have been omitted from the browser version to save space. It's still a little buggy but it looks and sounds absolutely gorgeous. Here's hoping it survives its own ambition and sees completion one day soon... it's already been in development for a year of hard work! 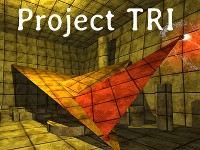 Triforce Not Included Here's an intriguing new project for all you first-person puzzle lovers. Project "Tri" is an upcoming title by Rat King Entertainment where you will be able to create triangles to solve various environmental puzzles. The game is apparently heavily inspired by Portal, as well as Thief and Zelda. Sounds like a clever basis for an action/adventure to me! A lot of details are still up in the air as development is in its infancy, but it looks like it could be a great time for anyone who likes first-person gameplay and using their head. Check out the official site for more videos and screenshots, and give the developer blogs a peep if you want to follow this one and show your support! 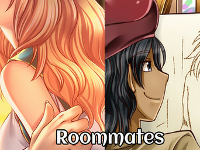 Love and Final Exams Are in the Air As a big fan of visual novels, I can't help but keep my eye on what's happening over at Winter Wolves, and though this game is far in the future it looks like another stellar simulation to come. Roommates will follow you as either Max or Anne at college, each with their own agenda, and will have you balancing your job and studying with growing relationships (and even romances) with your roommates. Each character has four different romance options, and if you're gay or bi, you'll be glad to see that this game is going to continue Winter Wolves' welcome tradition of including romantic possibilities for both preferences as well as heterosexuals. Winter Wolves always delivers incredibly gorgeous and professional looking titles, and while this one might be far away in the future, if you're a fan of the genre, much like cutie marks, you'll probably have to say, "But ah want it naaaaaooow!" In the meantime, why not check out Loren the Amazon Princess or Winter in Fairbrook? 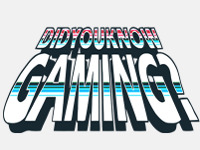 Oof! Right in the Nostalgia! Link time! If you love obscure gaming factoids, you might want to check out Did You Know Gaming? The Tumblr continually updates with snippets about games from Minecraft to Mario that reveal little secrets or surprising details about their development that range from the intriguing to the bizarre. For example, did you know Twilight Princess' strange NPC Ooccoo was named after the colour code for Link's tunic in the very first Zelda game? Or that players enjoying pirated copies of the SNES classic you should all have played called Earthbound received a very ugly surprise? While some of the "facts" lean more towards fan speculation than anything else, it's still a great browse to find out about all the weird Easter eggs and history of the games you know and love.

So, I've been a fan of logic puzzles since I did my first grid-based word puzzle in third grade. I've had a subscription to either GAMES or GAMES World of Puzzles since college, and Conceptis has a perma-link on my browser.

But the logic game that has completely captured my fancy is Tile Factory from CGDC8. It quickly bumped something else for a spot in my Favorites list here at JIG, and hardly a week goes by that I don't open it up here or at another host site to check out the chatter to find out if a sequel will ever be forthcoming.

I'm excited to see what this new game is all about! I'll be demoing it after work today.

Favorite logic game? How can I pick?!

Honestly though, my first big logic game stuck with me forever: The Incredible Machine Even More Contraptions. I've tried older and newer versions, plus other takes on the logic/Rube Goldberg games, but nothing else wrestled the spot out of my heart!

So much memories about The Incredible Machine! It's been a decade since I last played it, but I still remember the joy from seeing all the pieces in their places, defying all odds to work together in a chain reaction. Thanks for the nostalgia, Molchanoff =)

Though, as much as I love TIM, for me it's SpaceChem that takes the prize. The open-endedness of the puzzles means you have all the tools to do whatever you want, and they still manage to be hugely challenging. But it's more than just the puzzles. The soundtrack is simply epic, and the twisted plot behind it all completely exceeds my expectations for a puzzle game. That's why I'm always telling people to give it a shot!