Max and the Magic Marker

Available for a number of gaming platforms (PC, Mac, WiiWare, Windows Phone 7), Max and the Magic Marker is a creative platform game that utilizes drawing to complement its collectathon-style physics gameplay. You play the role of Max, an orange-haired kid whose drawing has come to life thanks to a magical marker he received in the mail. Now Max is running through three unique worlds trying to put a stop to this eggplant menace. It's a game that's as much creative thinking as it is platforming, and it'll tickle your inner child to watch it in action! 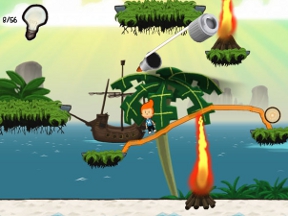 The main mechanic in Max and the Magic Marker is the ability to draw directly on the playing field. See that huge marker that is your mouse cursor? It can create platforms of any shape you desire. Just [left] click and start drawing. The second you release the button the creation comes alive, falling to the ground and becoming as solid as anything else in the game world. You must have enough ink to draw things, of course, and you can keep the marker full by grabbing orange orbs throughout each level. You'll also find glowing orbs and dark orbs you can collect to unlock the game's plentiful extra features from the main menu.

Another neat inclusion is the ability to step out of Max's imagination and freeze time. Pausing the game, as it were, allows you to carefully craft a structure while everything is motionless. Using this is your key to collecting everything in the game, as it's often the only way you can cross rolling gears (by building a sled, naturally) or floating atop busted fire hydrants.

Using the marker's abilities to traverse the environment is a natural, intuitive experience. For example, need to get Max to that platform up above? Try jumping and freezing time in mid-air. Then, draw a platform that hooks securely on to nearby pieces of land, un-freeze time, and hop aboard. Repeat as often as necessary, sucking in old drawings and repurposing the ink as often as you need. A little ingenuity (and a fast mouse hand) will keep you ahead of the game. 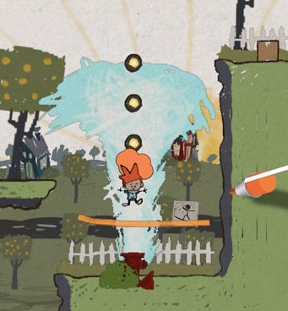 Analysis: Simple on the surface, Max and the Magic Marker is one of those games that gives more than the developers possibly intended. It's not just a platform game with a drawing mechanic, it's a real creativity tool that allows you to sculpt Max's world to suit your gaming style. And while the main game may seem a bit short (three or so hours from start to finish), the extra challenges and unlockable modes (including a sandbox feature!) more than double this length, making it the perfect amount of content.

Some of the game's quirky moments are worth the low price of admission alone. For example, one area challenges you to knock a basketball into a hoop. Normally this would be a test of reflexes, but with your marker, it's a puzzle-like challenge. At the start of one stage, you're greeted with a soccer ball to the face. Block it from the goal and you'll get a prize! And then there's the game of whac-a-mole, which is too cute for its own good! Most of these extras lead to collectibles that count towards your perfect 100% score, which is something you'll actually be motivated to do in this game, as the rewards are well worth the trouble!

The "wow" factor you feel soon after starting Max and the Magic Marker unfortunately doesn't last throughout the 15 levels. After a few stages you begin to feel things drag on a bit, as each world contains more identical puzzles after another, and once you know how to build stairs in the air, building them again isn't quite so fun. If you stick with it, however, the game rewards you with some unique situations that test your quick drawing abilities in new (and awesome) ways. It's just a shame you have to experience the slow lull beforehand.

Max and the Magic Marker is packed with charm, and its that sense of wonder that will keep you playing. The unlockables are fun to play with, giving the game some deep replayability. It's a short but wonderful experience you'll have fun with again and again!

Windows:
Play the online demo Get the full version

Harold And The Purple Crayon?

Is it still a buggy game? I played the demo sometime ago and there are some bugs like missing marker's ink (it is not checkpoint), stuck on the sky after jumping on seesaw, to irrelevant hittest that cause my character to fall from the ink stairs. I email the devs but they don't reply and to now I don't see explicit descriptions what they fix in theirs patches.

I don't get how drawing a sled gets you across gears, so I just draw a hamster wheel and run across them... a lot more efficient!

I really liked the last level, just simple platforming without having to pause every minute and draw stuff, then erase stuff...

Also, the boss got really buggy for me, I died a few times but the boss' health didn't refill every time... :D benevolent glitch

4,453 Views
12 Comments
chrpa— Jayisgames needs your help to continue providing quality content. Click for details Welcome to Weekday Puzzle! The first game by skerys is exclusively about shooting - finding the right angle is the key. Then follows a physics game by...  ...

5,445 Views
8 Comments
chrpa— Jayisgames needs your help to continue providing quality content. Click for details Your car needed an inspection and so you took it to Neat Escape's garage. They informed you that your car is ready, but when you get there, no...  ...