Mega Man:
Day in the Limelight 2

In the year 20XX, Dr. Wily has been defeated by Mega Man (again). He escaped capture (again) and life returned to normal, his eight robot masters returning to storage until the day their circuits may be modified to aid society. As it turns out, that day is today! Dr. Wily wasted no time attacking once again, unleashing a super virus that has disrupted Mega Man's systems and turned computers across the globe into enemies of humanity. With no other options at his disposal, Dr. Light releases the eight robot masters, hoping their virus-free circuits can defeat Wily once and for all. So begins Mega Man: Day in the Limelight 2 by Fusion Team, a retro platforming action adventure that's sure to bring a twinkle to the eye of any child of the 8-bit generation.

Day in the Limelight 2 plays like any classic Mega Man game, only now you're in control of the bosses instead of Mega Man himself. Choose a level from the stage select screen and you'll enter the level of a boss from Mega Man 3. Move with the [arrow] keys, jump with [Z], and fire your weapon by tapping or holding [X]. Complete each level by defeating the boss and you will unlock the player robot for use in all other levels. You can switch player characters in the pause menu or automatically with the [C] and [V] keys. Each robot has their own strengths and weaknesses, so experimentation is key. There are secret items to find, new abilities to unlock, and, of course, a climactic battle at Dr. Wily's Castle!

Analysis: Mega Man: Day in the Limelight 2 is unabashedly a fan game. It's a game made by Mega Man fans, for Mega Man fans, and those who are not Mega Man fans probably will not be swayed by its prodigious charms. That doesn't stop it from being a deliciously entertaining game, though, and for those who are still on the fence, know this: this is a polished, well-crafted work which succeeds in capturing the charm and feel of the NES outings, and it makes for some glorious retro fun. 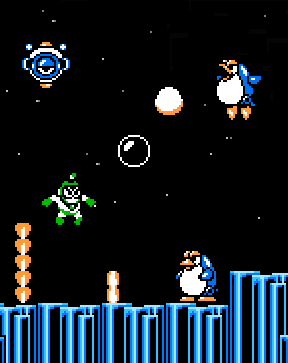 Though the Mega Man series is known for its platforming difficulty, it's not really Mega Man: Day in the Limelight 2's central conceit. Make no mistake: there are tricky jumps to maneuver and enemies aplenty to fight, but game challenges you to adjust your expectations of standard platform-hero guy action in order to control assuredly non-standard robot masters working their way through non-standard puzzles in non-standard levels. Surprises are around just about every corner, even if you've memorized every inch of every Mega Man game ever!

Outside of any supposed subversiveness of concept, Mega Man: Day in the Limelight 2 features robots shooting things with lasers and blowing up evil scientists. That's a pretty easy sell, in and of itself. It's about as close to the NES experience that you're going to get, without having to blow into a cartridge slot.

It's worth noting that this seems to run ok on Linux with Wine, though I did have some issues getting sound effects to work.

Hey, I just wanted to point out that you play as the bosses from Mega Man 2, not Mega Man 3.