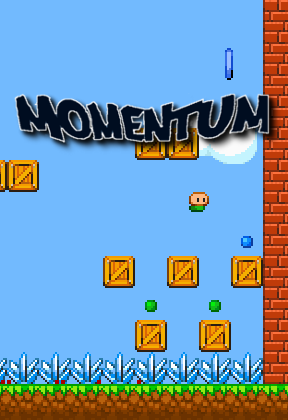 Platform games commonly require a fair amount of jumping to move around, but the author of this unique platformer, Tom Scheper, decided that jumping is the new walking. As the title implies, Momentum is your best friend and you can bound from platform to platform while dodging spikes and collecting colored candy orbs using that speed. Your character is willing to risk his life to feed his sugar rush and continue bouncing around to the finish. That is quite an addiction.

Since the jumping is taken care of, you move around using the [left] and [right] arrow keys. Holding one direction longer builds up more momentum while pressing the direction opposite of your movement acts like a mid-air brake. You can collect candy along the way, but if you want to break his habit, just head to the big, blue exit circle.

The difficulty curve frustrates in a good way that may keep you playing no matter how much you dislike the hyper, bouncing character on screen. The rather comical voice over for each time you die can be entertaining at first, but you will probably want it muted after your 25th consecutive death. The simple gameplay, bright graphics, and difficulty curve give the game a weird charm that you can't help but give a chance. The game may not be for the casual platform gamers out there, but if you are looking for a challenge, then this little physics gem is for you.

I like this in principle but its just to hard to control effectively. Change the acceleration constant.

for now, I abstain from rating.

That last level almost had me. Almost. I mean christ was it difficult, but I managed to best it in the end.

This game needs a "ragequit" tag. That would be one step above "highdifficulty."

Problem #1: This game is designed to require absolute precision, and punishes the player who doesn't have that. That isn't necessarily a bad thing, but with the control scheme chosen for this it's like requiring precision out of a shotgun. Just go look at QWOP: Intentionally bad controls do not a good game make.

Problem #2: Having some random, crystal-clear human voice tell me "you dead" every time I die is extremely jarring when everything else about the game, including the music, is retro-pixel styled. It's also really annoying.

One last thing: This game shouldn't be called "momentum". It should be called "timing" because timing your movement to the jump pattern is what trips you up most of the time.