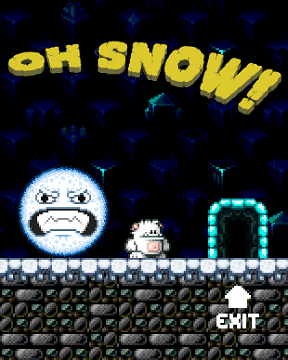 They call him Mah-teh. The Yeti. The Abominable Snowman (not to be confused with the equally-terrifying-but-more-sit-up-based Abdominal Snowman). But the most mysterious mystery of this cryptic cryptid, is how exactly the Yeti passes time when not rescuing Tin-Tin's friends or trolling Yukon Cornelius. According to Oh Snow!, a platform game by GameShot, that ol' Yeti spends his days being pursued by an angry anthropomorphic snowball. Well, we all have our troubles.

Oh Snow plays like the ultimate anti-escort mission. Run and jump around the Himalayan caverns with the [WASD] or [arrow] keys, avoiding obstacles and Angry Penguins as you make your way to the exit. The snowball will follow you as you move, and it's game over if he tags you. The snowball is just a tad quicker than you, but since he has momentum to deal with, running yourself back and forth can shake him a bit from your path. He can also help you out by mowing over those darn penguins. Bonus points can be scored by collecting golden suns. Oh Snow! is one of the few platform game where the action and puzzle elements are split right down the middle. You'll need both fast fingers and a strategic mind to blitz your way through all twenty-four levels. Some of the levels don't quite feel altogether fair, requiring at least a few deaths while exploring the game's mechanics (like how holding up while bouncing on a trampoline gives you a big boost of height). Still, even if Oh Snow! is occasionally frustrating, it never stops being a flurry of fun.

meh. I got to level 4 or 5. Might have played more if I could have seen more of the level ahead to actually plan a strategy....but probably not.

The hugest problem with this game is that you can jump on enemies' heads, and you HAVE TO in order to continue. That wouldn't be a problem if it were possible to do it consistently, but there just isn't any way to guarantee that a particular attempted jump off an enemy's head won't kill you. And the problem is huge enough to render the whole game unplayably broken past the first few levels or so.