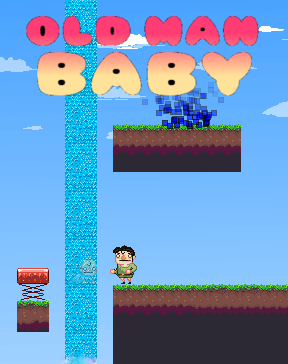 The riddle of the sphinx has tested many peoples puzzle solving skills for centuries, and now it's testing your platformer skills. Made during the What Would Molydeux game jam, Andrew Brophy and crew presents Old Man Baby where you jump and crawl as a man who must change in between stages of his life to solve puzzles. You have to take baby steps when starting out, but don't worry because your glory years will set in pretty quickly.

From the cradle to the glowing, pixel portal, you move around with the [left] and [right] arrow keys and jump (when possible) with [X]. Each stage of life has various abilities, such as the baby being unable to jump but can handle long falls without dying. The old man, however, dies falling from almost any height, but can use the spring pads to jump highest of every all the ages. You have to get the character into the portal as a particular age to clear the level, and that can only happen by walking through the fountain waterfalls. The game was made in 48 hours so it's on the short side, but it is a nice puzzle platformer to spend a few minutes. The animations are smooth, the 8-bit pixel graphics give it a moderately retro feel, and the controls are simple and easy to master. If this were to get an update with more levels, it could take up a good chunk of your afternoon, but for now, it's a tasty appetizer.

Urrgh. There are some serious design flaws that make even the short version of this game just plain irritating.

1-The old man dying when you fall too far is annoying because it's nearly impossible to gauge how far "too far" is consistently. It would be less annoying if two or three of the game's "puzzles" didn't hinge on not making the old man fall too far.

2-The boxes should move tile-wise instead of having a whole bunch of momentum every time they're pushed. Otherwise they get stuck in places they obviously weren't meant to go, and which no player expects them to go when pushing them, usually requiring a full reset of the level in question.

Didn't expect much considering the pervious comment, but I actually had fun and finished the game. Sure, there are a few niggles, but nothing frustrating.