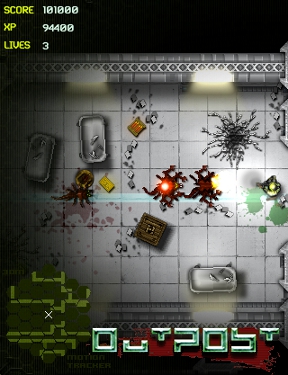 Stop me if you've heard this one before; you, a strapping and well armored space military type fellow, are sent to a remote outpost in space on what you think will be a routine mission but instead winds up containing your worst fear. Bugs... in... spaaaaaaaaace! Yes, in the action-packed shooter from Squize, GamingYourWay and Luxregina, Outpost:Haven, you discover that the titular location has been overrun with angry bug monsters, flickering lights, sudden noises, cryptic messages scrawled in blood, and lots of guns for you to fire into the air while going "Arrrrr!" But while Outpost:Haven may feel more than a little familiar, it's still an exceptionally well presented and fun game for fans of corridor-crawling monster blast-fests.

Use the [WASD] keys to move (there's an option to switch this when you start a new game) and the mouse to aim and shoot, swapping available weapons with the [shift] key and tapping the [spacebar] to reload when necessary. Hitting [P] will bring up your menu and super futuristic PDA, which lets you browse through messages and statistics, and view the map in full when you find one. Shooting attacking monsters has the added benefit of keeping you alive, but it also gains you experience points that will rank you up, which in turn allows you to purchase better equipment at the special terminals scattered throughout the area. Throughout each level, you'll find cash, ammo, health, messages, and keycards lying around. Keycards open certain doors, but in a pinch you can always take the knucklehead approach and blast them open. Just stay on your toes; you have three lives on each level, and after those run out, you'll have to start the stage all over again.

Despite being rendered in Itty-Bitty-Vision that may not be kind to your eyes for long periods, Outpost:Haven is mostly a very good looking horror shooter packed with attention to detail and lovingly crafted carnage. While attempts to craft a story fall somewhat flat due to how scant the otherwise interesting narrative is, the game offers up some surprises with creative use of lighting, sound, and even the environment. Of course, the game isn't particularly scary. It's hard to be intimidated by beasties no matter what sounds they make when you're staring down at them from a God-like perspective that reduces them to tiny little skittering specks of colour on a small playing area. Still, as a shooter Outpost:Haven is more than adeptly made, even if it doesn't offer a whole lot of innovation, and if you enjoy monsters and the blasting thereof, especially while wearing super space power armor, then this might just be the cowbell you're looking for.

this game pleases me immensely

Thank you so much for the great review.

Not scary, you really didn't jump first time one of those red eye guys popped up ? I must admit the toaster popping always makes me jump so maybe I have a low threshold.

[Hi Squize! Thanks for commenting. I liked the game a lot, but for jump scares to work on me things have to be right in my face, and because the game was top-down and so small, I didn't ever really feel threatened or afraid. (Also, the red eye guys always seemed to pop up at a comfortable distance in the shadows and then hold position 'til I got close, so I always knew they were coming.) I think that for me personally, if the game had been first person or a closer side-scroller so I felt closer to the action, I probably might have been scared a few times. As it is, I still liked the game even if it didn't spook me. :) -Dora]

I enjoy the atmosphere provided by the sound and the detailed environment, but I have some issues with the game play.
Maybe it's just me, but the character moves so slowly that it's impossible to run away from enemies. So the only way to defeat those bugs is to stand at a safe distance and blast them before they reach you-ergo not much skill involved.
I was wondering if an upgrade would make the guy move faster but I couldn't make it that far since I kept being chewed up.

I'm really enjoying it, but I seem to be stuck on the level where you have to deactivate the lasers to gain access to the mainframe (with the security turrets). I got into the mainframe, but and it says that I'm done, but when I return to the lift I don't go anywhere. I've been all over the area map (eventually getting a game over because I am not the BEST at avoiding turrets) and could NOT find another lift anywhere. Am I missing something? I must be, right?

A problem I had was the game never pauses when you automatically go to read a story log file in the game (died trying desperately to close the PDA).

hothotpot,
I didn't make it that far but if the story line makes any sense-and it looks like it does-you must be missing another lift. I found a log file explaining that you couldn't use the same elevator to go to a different level, for containment purpose.
I would put this in a spoiler just in case, but I don't know how to...

hothotpot: you gotta go past the mainframe, there will be another lift past some more obstacles there. To get a better idea of the overall map, you can check the floor plan on the PDA when it's available.

catnip: I played it through and there are no upgrades for the character, only for the weapons. I agree that the guy is a bit on the slow side, especially compared to the baddies. A 'sprint' option could've been useful.

It's a really nice game though, thanks for writing about it, Dora! :-) Game design is well-thought out, the story is decent and the art is gorgeous.

There was only one place where I believe the artful display hindered gameplay: weapon selection. When you bring up the screen, the weapon choices come up one after another, each taking its sweet time with its animation. Though this keeps up the space-marine feel, the slowness breaks the fast-paced battle experience. I found myself avoiding switching weapons unless very necessary, for this very reason.

I also found a bug: purchased weapons don't carry over in swarm mode, which they supposed to, according to the achievements. Speaking of which, I feel the 'challenges' are bloated, rewarding just about every action except walking. Less is more.

Finally a bit about the last level:

It's possible to finish the game without completing the objective. The mission was to blow up some explosives with a fuse cap, but while searching for that, I came across and finished the final boss, after which there was a path to a cutscene and 'done'. Left me a bit confused.

The idea was that your character would auto-arm the explosives when you got close to it (so the plot doesn't get ruined), of which the fuse would be barely enough time for you to escape to the life. Then, it turns out the explosives failed to detonate, so you had to find another way to blow up the place, or resort to plan B. In the end you kill the final boss and escape (plan B).

I see. I've replayed the level,

this time avoiding the bossfight until I found the fuse cap elsewhere, and got the part of the story that you described. Tricksters, haha!

Also, I found part of an easter egg puzzle:

a football on lvl5. Took it with me to the exit lift, but didn't do anything. Anyone got an idea where it should be brought to?

Siamjai
You have to bring the soccer ball in lvl 5 to the start life, where you first came out
and the 1st easter egg is in a bathroom

SiamJai
for the 5th level football


bring it to the beginning lift where you first started

Thanks for the help, guys, I eventually figured it out after looking at the level map and then felt like a dolt.

Anyone have any idea on what all the Easter eggs are? I'm at a loss.

Thanks for the help, guys, I eventually figured it out after looking at the level map and then felt like a dolt.

Anyone have any idea on what all the Easter eggs are? I'm at a loss.

Another easter egg is on level 2.

Just push the desk back where you pick up the Master Info Card.

Has anyone watched the film plan 9 in the game i thought it was cool it gives you a feeling like in the game espeacially if you watsch at night.