Usually when games bring you back to your childhood, it's a good thing. Nostalgic. Filled with memories of Saturday morning cartoons, footie pajamas, and cereal that's 75% corn syrup. But in Minority's indie puzzle platform adventure Papo & Yo, for some people those memories might be more than a little bittersweet... or just plain bitter. Originally only available on the PlayStation 3, it's about a young boy named Quico who has spent a lot of his short life feeling alone and powerless against the danger inside his own home. As the game begins, Quico, hiding in a closet, goes through a glowing portal that appears in front of him and spits him out somewhere strange. Ramshackle buildings, tangled alleyways, hot midday sun... and a little girl who seems to be able to literally draw reality around her as she wishes. 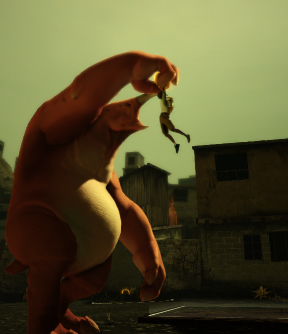 With nowhere else to go, Quico chases her down only to discover she wants nothing to do with him, but soon finds himself befriended by a chipper, back-packing robot named LULA who wants to introduce him to a beastly tower of muscle and fangs known simply as Monster. The two quickly become best friends, and Quico loves Monster... even when he's afraid of him. And Monster's addiction to potent poisonous frogs that, when consumed, turns him unpredictable, violent, and angry means Quico has quite a lot to be afraid of. But he loves Monster too much to run away, and Quico is willing to do anything it takes to save his newfound friend from himself... even if it means putting Quico himself in harm's way.

Use the mouse to look around, [WASD] to move, and the [spacebar] to jump. Once you've got LULA, hit [spacebar] again in midair to hover short distances. LULA can even activate faraway switches for you by pointing and them and right-clicking or pressing [Q]. [E] lets you interact with sort of things, and some objects will prompt you to perform contextual mouse movements, such as dragging the mouse to the side to pull a lever. Although the world you're exploring looks fairly ordinary at first glance, you'll soon discover it's anything but. Drawings and cardboard can take on lives of their own and allow you to change the landscape around you. If you get stuck, keep an eye out for hint boxes to point the way. Once you join up with Monster, you'll have to figure out how to use him to get around... he's bigger and stronger than you, but also pretty lazy, so you'll usually need to use coconuts to lure him around. You can't manually save, but the game autosaves for you at checkpoints and won't ever boot you back very far if you fail or fall. 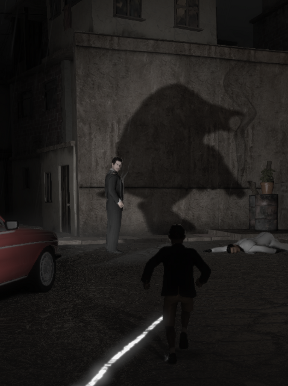 Analysis: Papo & Yo is one of those games that really manages to capture the important parts about being a child... the wonder and the vulnerability, but also the unexpected strength and tenacity. Minority has crafted a world that feels both familiar and magical, and recalls all the imaginary influence you used to pretend you has as a kid as Quico alters his environment with chalk and cardboard. Part of what makes the design so great is how often it takes you by surprise, as houses sprout legs to scurry away from you, lifting a crude box causes nearby buildings to rip from their foundations and float in the air, and more, all rendered in rich colour, sound, and atmosphere. It's a world that begs you to run and jump and play and explore in it... right before it bares its teeth. The more you play, the more clearly the game begins to fill in the gaps in the story without words as you discover the truth about Monster, Quico, and the people trying to protect him.

The gameplay itself is at its best when embracing that rich imagination. You never really lose that little thrill of delight when you see the landscape shudder and rumble around you with the push of a button or pull of a lever, and the more you see, the more you lose yourself in it. It's not what you'd call particularly challenging, for the most part. The way forward is usually clear and just requires a bit of simple thought and timing instead of any particular platforming skill. Which is fortunate, since precise movement and reaction is sort of awkward, especially when you're trying to hit a target or throw something. It can be difficult to aim your landings while hovering with LULA, and it's also not always visually apparent what's scenery and what's something you can use... or walk on. It was never enough to make me want to stop playing, but whenever it happened, it broke the immersion for me. 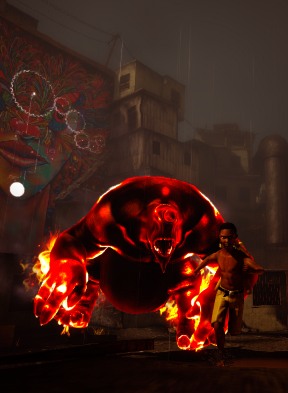 Monster himself is an immediate delight in your first interactions with him, and the game is adept at making you fall in love with him as fast as Quico does. The animation and design used to bring him to life are fantastic, infusing him with personality though he never says a word. The relationship between the two is the crux for the whole thing, and how you feel its handled is ultimately going to be a personal thing... you may feel it hits the nail on the head, or find it too treacly and simplified. As the story unfolds the more you play, the more obvious the narrative about abuse. Personally, I found a lot to relate to in it. It's a simple, but very honest, depiction of the relationship between vulnerable child and abusive parent. You may fear them, sure, and there are times you wish you could run away forever... but when they're not on something, you love them so much and so desperately you're not only just willing to risk it to be near them, to keep coming back... but you also feel like maybe, just maybe, if you try hard enough... you can fix them.

While some players might find the gameplay a bit too simple and repetitive, for others it might simply be too uncomfortable. Quico's helplessness at the enormous paws of Monster when the beast is in the grip of a frog-induced rage, watching the young boy being chased and slapped around while powerless to stop it at the hands of someone he loves, is somehow more disturbing than many more excessively violent games. But in a way, these are the types of games we need more of. The ones that come from those hurtful dark places in the most honest fashion possible, willing to expose, explore, and reach out with the sort of love and willingness to understand, and hope, that many games don't bother with. Though rough in places, and even hurtful in others, Papo & Yo is ultimately a painful yet beautiful adventure well worth experiencing whatever your background.