Pid is a unique and heavily atmospheric platform game from Might and Delight, a team of developers who obviously know some secrets about portable stone-based gravity control the rest of us aren't privy to. Set in a hazy otherworld and starring a lost little kid, you'll learn to control small cones of gravity as you work your way through bizarre landscapes. Sometimes Pid feels like A Boy and His Blob, sometimes a stealth game, and sometimes even Portal. But really, Pid is Pid, and it stands strongly enough on its own to be something unique. 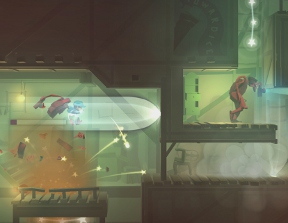 People in the world of Pid hop on the space bus, travel to their space jobs, presumably go to space school, and in the case of the unlucky protagnoist Kurt, get stranded on a strange (space) planet after falling asleep on the bus. Naturally the little guy wants to get back, and since the bus leaving from this place doesn't seem to be coming anytime soon, he heads to the conveniently located Old Castle in search of a way home. After meeting a few odd characters and digging his way through cavern and attic and dining room, he'll start to realize something fishy is going on on this here planet. Somebody might even be following him!

For the most part, Pid controls like a standard platform game with walk and jump controls, ducking and crawling, and maybe a bit of enemy/spike avoiding. The real oddity arises when you consider the Gravity Beam, a small column of light that can be created by throwing special gems Kurt gets near the beginning of the game. Toss a gem and the beam shines forth. Hop into the beam and you'll slowly move in that direction, along with any hapless enemies that get in the way. By using these columns on walls, slanted surfaces or moving platforms, you can pull off some amazing mid-air maneuvers. Useful once you start encountering spike traps and mechanized toy things that shoot rockets at you! 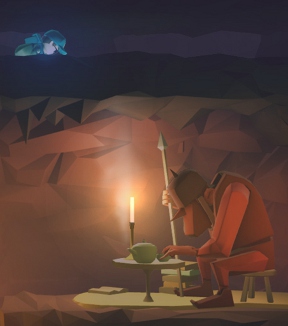 Apart from gem tossing, Pid also features a few other items to create a deeper sense of intrigue. Most of these will be purchased from stations that sell them in exchange for stars, a form of floating currency you'll find scattered throughout the game. You can use bombs, for example, to blow up certain walls, shirts to give you a little extra defense, and a music box to slow enemies and their projectiles down a bit. And that's just for starters! Items are limited and best reserved as a last-ditch effort, but they go a long way to extending the gameplay and giving you more sway over the environment.

Analysis: Pid has an extraordinary art style that is at once gloomy but foolheartedly optimistic. You immediately get the sense that this world has seen the wrong side of a corporate steamroll one too many times, and judging by the state of things it's a wonder these people aren't moping in the streets all day every day. But there's a sense of hope in the dusty shadows ahead, highlighted by the main character's sense of optimism. He knows he'll make it home, no matter what's in his way, and that attitude of innocent hope is contagious. It's just one of the many reasons you'll press on and on through spike trap after spike trap. 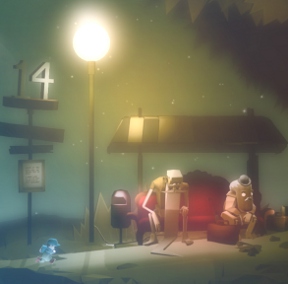 Here's another area where Pid really shines: level design. Remember when secret corridors weren't marked on maps or indicated by not-so-subtle arrows in the background? We do, and Might and Delight does, which is why Pid is packed full of secret crannies and tucked away nooks you can wiggle yourself into. Most of the time you'll find a handful of bonus stars, but occasionally you'll nab a collectible item or something else special. This makes it so much more fun to explore Pid's worlds instead of just dashing through to the exit.

And finally, Pid features local co-op play, a somewhat surprising but utterly wild addition to the game. There's no online option, which is a bit of a shame, but if you can get a friend over to check the game out, it's a give and take organized cooperative nightmare. You'll yell and laugh and cry and play until you can't look at another gravity beam (or your friend's face).

There's no shortage of reasons to grab Pid and give it a try. It's familiar enough to be easy to get into, different enough to avoid the copy/paste game design trap, and its atmosphere is something video game artists should look at for inspiration. The gameplay variety stretches from high action to careful stealth, but it never gets frustrating. One of the best all-around platform games we've seen for some time!