There are only two words you need to see before downloading this game: Studio Pixel. The creator of Cave Story has been hard at work on the upcoming sidescrolling platformer Kero Blaster, but in the meantime, we get a free game! Pink Hour serves as a small taster for next month's big release, stuffing plenty of shooting, pixel-perfect jumps, and painfully high level of difficulty into its cute little package. 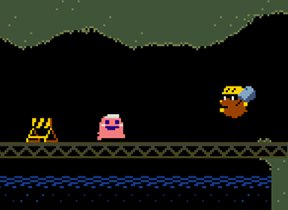 Use the [arrow] keys to move and the [Z] and [X] buttons to jump and shoot. While firing you can strafe to keep a lock on your target, useful for pelting bullets at baddies that just won't die. Apart from that it's mostly just you and a bunch of jumps across wide gaps to land on tiny little platforms. Seriously, some of them are about the size of your character's eyes. If you miss you simply have to walk back and try again, but because you only have three lives and no continues, be ready for some serious gamer rage to set in. Then shake it off and jump back in for another try, because it's a Pixel game, after all!

The pixel art and music are wonderful as usual, but the floaty physics that worked so well in Cave Story seem to be working against the game here.