I could probably accurately sum up my experiences with Hopoo Games's indie roguelike action RPG game Risk of Rain by adding the subtitle "the review of many ragequits" or maybe "why you gotta hurt me so bad?" After the cargo spaceship you were riding on is attacked and crash lands on a hostile alien planet, you find yourself the only survivor, and tasked with working your way through each dangerous area by scavenging what supplies you can from the debris (... as long as you can pay... ) and finding and activating the teleporter to take you to the next stage. The twist? You can't idly waste time grinding levels for as much as you want, since the longer you spend in game on a playthrough, the more difficult it gets, and trust me when I say there is very little out there that doesn't want to grind you into jam between its toes. Hope you like permadeath! 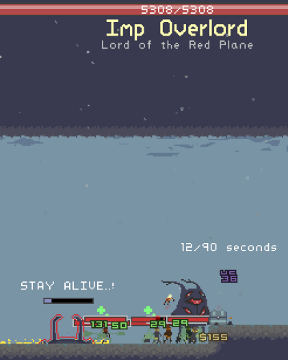 The game's default controls are the [arrows] for climbing and movement, [spacebar] for jumping, and [Z], [X], [C], and [V] to activate your abilities. [Z] is typically your default attack and can be used over and over, but most other abilities will come with a cool down time between uses. The levels are completely randomised every time you play, so you have to scour every inch of them looking for the teleporter. Once activated, you'll have to survive for ninety seconds, which is easier said than done since activating it also summons a big angry boss monster to deal with, and when time's up, you still have to clear all the enemies from the area before moving on to the next stage. Fortunately, levels and items carry over between stages, though remaining cash is converted into experience points... as long as you don't die, in which case you'll have to start all over from the beginning.

Destroying monsters, of which there are many, many, many kinds, nets you two very valuable things... experience points and cash. Experience points are self-explanatory, working towards upping your level and thus your damage and health. Cash, however, is just as important, since most of the cargo cases and chests littering the planet must be paid to be opened. You'll find all sorts of things, from powerful weapons, to items that grant you passive skills or bonuses, even drones that will help you fight. Death might be the end, but you'll also unlock even more item drops and entirely new characters with their own special abilities to play as, too. 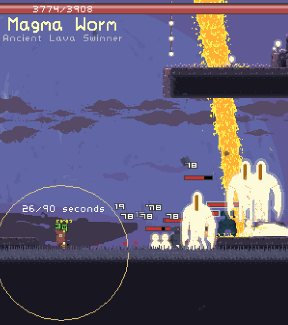 Analysis: By stripping away your ability to hang around mining levels, Risk of Rain forces you to move fast and adapt. If you wait too long, you'll find yourself swarmed by powerful enemies, but if you don't gain enough levels, you won't be ready to take on the portal boss. It's a delicate balance to try to get right, and thankfully the game has a demo for you to try since it won't be for everyone. It's nonstop action with a deliberately grueling difficulty curve, and it feels like an uphill battle every step of the way. Like all roguelikes, the element of randomness can either work for or against you, and here it's primarily down to the items you find. The right assortment of equipment can turn the tides enormously in your favour, and most players will quickly develop a preference after some experimentation. What might be more interesting is how drastically different the style of play can be between unlockable characters simply because of the few abilities they come with.

The overall stage design is admittedly sort of bland, tending to consist solely of platforms and strings/ladders to climb. This actually can wind up getting tedious if you have to spend a lot of time crawling around a level looking for the portal or just trying to get around. Of course, if you have time to stand around complaining about the lack of environmental bells and whistles, you're not doing it right, and besides... there's a certain eerie beauty to a lot of the alien enemy designs. You'll get a lot of chances to admire them, too, since the game's idea of upping the difficulty is not only to spawn stronger enemy types, but to start barfing them at you in staggering numbers, usually while you're already running away from a giant electrocuting jellyfish boss monster. Though the actual game itself offers next to nothing in the way of a story, the descriptions of creatures you can find in Monster Logs paint a picture of a fascinating world.

As hectic and vicious as Risk of Rain can be, however, it actually feels quite streamlined. It's designed to force you to keep moving, and the way dropped experience and cash will automatically be drawn to you no matter where you are means you never really have to slow down. It's not just about frantically running away from everything while spraying bullets behind you, since a lot of the bosses and lesser enemies require some strategy to take out quickly and efficiently with minimal damage. If you enjoy a challenge, roguelike action, tons of unlockable items and characters, and a retro aesthetic, Risk of Rain is definitely worth checking out... and the co-op play option allows you to tackle it with a friend, too.

I remember when this was first announced on JiG, as a kickstarter project!

Wow, to think it's finally become a fully fledged game. That's why I love this site, to see things like this from beginning to final. :)

I can't put this game down! It really is just a lot of fun, and you will die, a lot. But it's okay, because when you do there's usually some new item unlocked for next time :D

One thing i will say is give it a fair shot. Seems very difficult at first but once you start unlocking a few items and get the hang of it it's very possible. I've put 22 hours into it so far and only beat it twice.

There's also a ton of secrets to look for, and achievements to get (Getting achievements unlocks new items for use in future games.)

And while i agree the actual design of the levels is a bit simple in terms of just platforms and ropes, they are all definitely beautiful to look at :)

I only tried the demo so far, but I wasn't impressed enough to buy the full version. The tension between going fast vs. gaining levels and items is ruined by two things in my opinion:

1. The bosses have so many hitpoints that you need to waste several minutes of precious time just standing there shooting at them to kill them.

2. The teleporter could be in a few different spots so finding it quickly is mostly a matter of luck.

Another problem is that the actual gameplay feels stale pretty quickly. Once you master spamming your four moves as appropriate, the same strategy works on every enemy. There are a lot of different items but they mostly just heal you or increase your damage, instead of changing how you play.

Still a lot more fun than the average game, and I have great respect for anyone who can make a randomized/procedurally generated game.

buy this game... seriously... its awesome. if you stole it... buy it anyway to reinforce the creation of more like it. Its simple in some ways but a polished gem with surprising depth.

I'm mostly a troll... this game deserved a post.

Its very roguelike... and it takes some time to get used to what "works" regardless of character. There is also luck involved with each play through like any roguelike. Some power ups will suit your character, playstyle, or are just better... but the synergy every time is like a whole nother adventure.

Considering the way you play or want to play depending on your goal each time... you either rush... or quite the opposite. You can also ignore the "time" and increased difficulty as time passes to just get to "god"-like. On the hardest difficulty this is a rare but VERY satisfying feat to achieve. But there is a cap to how hard the game gets... if you're alive when you get there... you can keep repeating random maps to farm even more.

I miss good 2d side scrollers like this gem... give it some time to get acclimated and if you like a challenge you'll be hooked for a while.

As mentioned above... great unlocks / secrets / achievements. Each game is a new play through but you do permanently unlock characters and power ups. Some of those power ups really change the way you can play.

I understand the "stale" comment... it does repeat itself in a way... but any rogue like has that to a point. The challenge ramping up and the difficulty to do a full run, or fun of the unlocks, far outweighs that being a negative to me