Who doesn't love climbing mountains? Clamoring across stone, breathing in the pristine air from high above the land, defying all sensible concepts of human strength and endurance so you can grab bags of gold floating in the sky. Sure, our experience with climbing real mountains might be limited, but we're pretty convinced ROCKMAN (no, not that Rock Man) from TwO Bros. Games is a realistic simulation of the sport. If it's not, well, we'll want a full refund on that CD box set of square dancing music we just ordered. 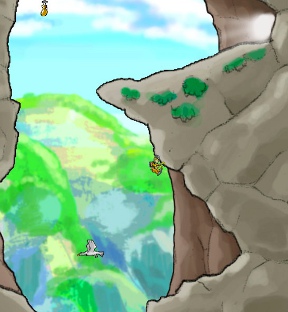 ROCKMAN is all about acrobatics, loot collection, upgrades, and exploring every nook and cranny of each level, almost like a metroidvania title but with a distinctly arcade slant. Move around in ROCKMAN using the [arrow] keys, then tap [X] to jump, [Z] to use utilities, [C] to interact with things or to heal yourself, and the [spacebar] to latch on to surfaces. Most of the time you'll be running around with the [spacebar] held tight, but it's the thrilling leaps into the sky that will get you to new ground. Or, get you a comfy spot in the cemetery. Your overall goal is always to reach the summit of the stage, but there are also a number of people standing around waiting to challenge you to flag collecting races. Gather all the gold you can, do your best in the races, and head back to the map when you're ready to unlock some new territory to explore!

You can grab and hold on to any surface in ROCKMAN, but you'd be surprised at the places this doesn't get you. Like, across horizontal spaces, or around twisty sky caverns. Still, if you can see it, you can eventually reach it, all you have to do is keep collecting gold so you can unlock new levels, then search those levels for an upgrade. The first upgrade, for example, grants you a wing suit that allows for limited gliding. This makes some areas immediately accessible, but as is the case with games this focused on exploration, that will only whet your appetite for more, more, more! 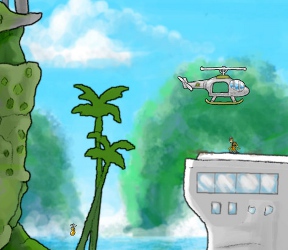 Analysis: Much like TwO Bros. Games' previous offering, Climb to the Top of the Castle, ROCKMAN features a rustic hand drawn visual style that looks simple but gives the game a great aesthetic. There's also a nice toe-tapping soundtrack consisting of old country and blues music, not to mention a washboard song or two. It's a bit reminiscent of what RunMan: Race Around the World did with its music, utilizing public domain songs to create a very distinct feeling. You can almost smell the mountain air of the early 1900s Appalachians!

ROCKMAN's basic design has you completing sections of stages over and over again to accomplish goals and gather as much loot as you can. Gold can be used to buy things in the store, but its main purpose is to unlock new stages to complete. Honestly, this is where ROCKMAN seems to falter a bit, as you do have to do some grinding in order to amass the cash you need to proceed. It's in direct opposition to the game's otherwise free and open sense of exploration, which is why it stands out so sharply. If you don't mind a little repetition, you'll get through this game just fine.

Other than expensive levels, ROCKMAN is a solid (he he) experience that invokes the old school feeling of uncovering secrets and finding new treasures around every corner. There's a lot to find and a lot to do in this game, and accomplishing things is an exercise in way-too-cool mountain climbing acrobatics. Best of all, ROCKMAN is available as a pay-what-you-want game, meaning you can donate as much as you like to experience the thrill of hanging upside down over a choppy sea, crying because you can't hover in mid-air to get a bag of gold.

Windows:
Get the full version (pay what you want)