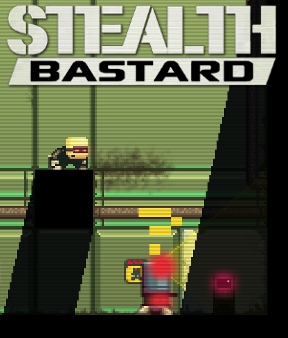 Bam! Caught ya! Being stealthy is something we all do when creeping around the kitchen at night, going for that last piece of cake before anyone else in the house gets a crack at it. In Stealth Bastard, a stealth platform game from Curve Studios, moving around unseen is what it's all about. Instead of getting busted and forfeiting half a slice of cake, though, you get blasted to pieces by a robot laser the size of your torso. Ouch!

Stealth Bastard is built around doing quick runs through shadowy, robot-infested, super-secure corridors and rooms without getting seen. You can crouch and hide in the shadows when something with "eyes" is nearby, but as soon as the coast is clear, hop out and get moving. To make it to the exit, you'll need to open doors, control elevators, hack consoles, and wind your way across moving platforms, all without being seen. The faster you make it through, the better your time will be, and completion scores are tallied via an online high score board, so you've got real incentive to get out there and shave a few seconds off your time.

The visuals in Stealth Bastard are superb, and the game makes heavy use of lighting effects to set an atmosphere of intrigue. In addition to the standard pack of levels, you also have access to the community-made database of stages as well as an editor to craft your own. There's no shortage of challenge, action, or sneaky espionage stuff to be had, all for the asking price of absolutely nothing!

Very good game! I was probably one of many who suggested it for review.

I hope with the extra exposure we see more custom made levels. I've made a few too (search for diegzumillo at the database)