Michael Shirt's free platform shooter Tess is one of those weird little indie games that always makes you feel just a little out of it when you play... but largely in a good way. You control the titular Tess, a sad little girl who apparently didn't have a very good day yesterday, though nobody will really come right out and say why. A letter from her friend Milly asks her to come to a certain spot, promising her that it'll be worth her while. Sounds fairly simple, right? But there's something decidedly off about this whole thing, from the distorted yet still musical soundtrack to the masks everyone seems to be wearing. Use the [arrow] keys to move, [Z] to jump, and [X] to shoot, while [spacebar] will let you interact with things. Tess' health is in the upper-left corner, and can be replenished with the hearts enemies sometimes drop, or by using the big S-shaped save points. When you destroy an enemy, they'll drop a glowing white spot, and if you gather enough of them, you'll gain an extra heart. 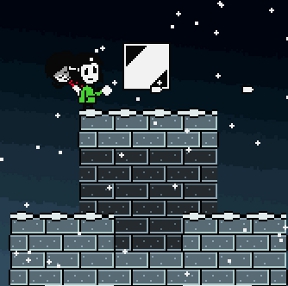 The main problem with Tess' platforming aspects is that her momentum always seems to carry her just a bit too far even when you take your finger off the key, making movement seem overly zippy when you're in the air. For the more precise jumping bits, this winds up being frustrating when you're forced to s-l-o-w-l-y edge and hop your way through so you don't end up overshooting an edge and have to climb back up to where you were. It slows everything down and makes the game feel less fluid than it should, and with some areas being big enough that being sent back to the save point will make you grind your teeth, Tess flirts with being obnoxious. Eventually the areas get a little more complex, adding in elements like ice and, um, breaking the laws of physics, and it turns the straight-forward hop-and-shoot style action into something a little more difficult as you have to think more and act faster. Still, the gameplay is on the whole on the simplistic side, despite the gradual scale in enemy challenge, and so the draw for most players is likely going to be Tess' extremely surreal atmosphere and story.

As cute and off-kilter as Tess initially seems, there's something a little ominous about all of it. It's not a horror game, but the off-putting character and enemy design coupled with the discordant yet fitting soundtrack will put you just a little on edge. Most players will likely figure out where everything is going, but there's just something about the way Tess shows rather than tells through its sparse dialogue and imagery that keeps you hooked. Despite its rough edges in the gameplay department, Tess has some good ideas and it's clear its developer has a lot of talent and creativity. If you like your introspection with a healthy dose of creepy and strange, Tess is worth checking out, and is hopefully not the last we see from Michael Shirt.

This is a quick and confusing game. I managed to navigate it rather easily, but the whole thing is bitter and leaves you on a sad cliff. The biggest thing I want to know is how a little girl can get a gun. 3.5/5 stars.

I know you said this game was short but man, it barely takes 5 minutes. Kind of a lame ending too, we never find out whether Milly survived jumping off that cliff. Or maybe that was the point, having Tess sit on her bed, forever wondering what could have been. Makes you think.

Did you not jump too? :) The game is quite a bit longer than the cliff.

What??? I can't jump off cliffs, I'd probably die!

That's interesting! It never occurred to me not to jump, but if you think about it, not jumping is also a valid way to play.

You decide it's silly to jump off a cliff, go back home, and wonder what would have happened if you jumped, and what happened to Milly. Not playing the game turns it into a different game.

Of course, I'm still not sure what happened to Milly even after playing...

It reminds me of those people who decided to be blacksmiths in Skyrim. They get up in the morning, make weapons, sell them to buy food, go to bed, and repeat. No quests, no dragons, just making a living.

I was just pointing out the alternate ending in a tongue and cheek way. I actually found it accidentally because I wanted to go back and try to get leveled up one more time before jumping down.

I did of course reload my save and jump immediately after. ;P