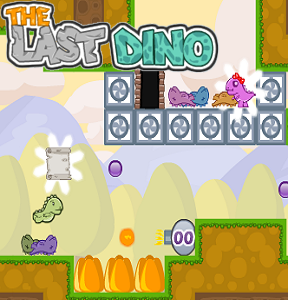 As if it wasn't bad enough knowing that all your friends and family were massacred by a giant asteroid, now you have to survive a game with spikes, evil foes, and fire balls? It's a sad life for this dinosaur in The Last Dino by Rarykos. A one-button platform action game, Last Dino is ready to test your gaming skills. Using your left click or [spacebar] is all you have to do in order to have an action occur. There are twelve levels and each level has four scenes to run and jump through. For the entirety of each level you will only be able to use one special move which includes jumping, controlling the lasers, and controlling launch pads. There are multiple items in each level to collect that will help decipher a message that will appear at the very end of the game.

As far as platform games go, The Last Dino doesn't have any intentions of making things too easy for you. Perfect timing is paramount to success especially when there are spikes ready to kill you at the slightest touch. Unlike other single button games Dino refrains from being a one trick pony because of the addition of multiple abilities but maintains a good level of difficulty because you can only use one ability per level. Be prepared for a few growls of frustration when not launching yourself just right but also be ready to feel satisfied when you beat that level and show those lasers you're too cool for extinction.

I liked it. Good variety and difficulty for a 5-10 minute casual game experience.

What were the purple spheres for?

The purple spheres speed your dino up a bit with each one you collect. Some jumps rely on you having a certain minimum speed.

I hope I'm not the only one that started humming the theme song to Denver the Last Dinosaur when I saw this game.