The Lost Vikings is a great game; one of the best platformers ever. But haven't you ever wished that it had more... zombies? Well good thing for you Gentleman Squid has come along and developed this game for you. In Three Dead Zed, you play as a zombie who has three forms, each with its own abilities. Your job is to jump, climb and attack your way to the end of the level to rescue some defenseless beings. 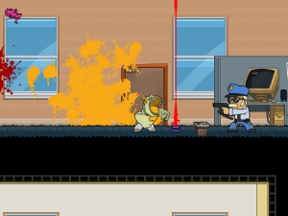 You control a nameless zombie (why bothering naming them, right?) who has been trained under Project ZED to do the bidding of your makers. You can walk, jump, attack, climb ladders, and, more importantly, thanks to the DNA Smasher, take the form of two other zombies who in some aspects are more impressive than you. As a single entity, you can do anything! Even break free from your captors and escape this corporate mess... and save cats?

Move your chosen zombie around with the [arrow] keys. Attack with [Z] and interact with [X], though not all the zombies can use both functions. You cycle through the forms by using [Q] and [E], though you must be standing in a space large enough for the form you want to take. Three Dead Zed is also equipped to handle an Xbox 360 controller, so, if you have one, give it a shot. In each level, your goal is to reach a cat that really needs rescuing. Standing in your way are an array of lasers, security officers, buzzsaws and several other hazards. You'll have to utilize each zombie form to your advantage to safely get to the end. But if you happen to die along the way, that's okay. The only penalty for death is being transported back to the most recent checkpoint. 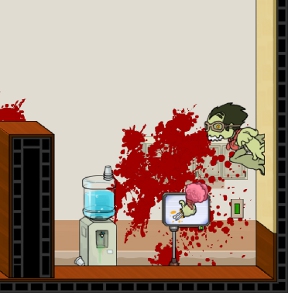 Analysis: There are lots of zombie games around. Many of them take the form of shooters and other such strategy games, so to see one where you not only play as the zombie, but which also comes in a platformer package is refreshing! Plus, despite all the cartoon blood and guts, it still manages to be cute with all the bright colors, old ladies and, of course, cats.

Even though Gentleman Squid was going for three characters that handle differently, the controls can feel a bit off. The agile zombie seems to run too fast as though the floor were slippery and, because the lady zombie's arms drag on the floor, she can stand on an edge when her feet are completely off it, which can throw your sense of hit detection. But these are complaints that are easily overcome after playing around on the first few levels. Really, who can blame the zombies for how they move? What do you expect for a being with only half a brain and necrotized muscles?

The developers used hand drawn graphics for this game, and the quality shows! Each zombie has its own look and personality, and you'll quickly find yourself attached to one, if not all the forms (props to the female zombie for rocking the bikini top). While the storyline leans on the strange side (yes, even for a zombie game), you'll still feel compelled to get to the end of the level just to see what the game will throw at you next. Three Dead Zed is a great platformer, and with all the hidden rooms and computer logs to find out more of the backstory, there's motivation to come back to it more than once to get the complete experience. And with a version of the game for Windows, Mac and Linux, people of all OSes can get themselves some zombie time. Help break the mold for these creatures so inconsiderately portrayed as mindless!

love the art/style of this game but have to say it plays rather bland. 3 shrooms.