Mummies. Why did it have to be mummies. Also, spikes. Pharaohs? Oh, and I guess there's snakes too, but what sort of sissy would be afraid of those? In Donut Games' mobile action platforming adventure Traps n' Gemstones, you arrive at the excavation of a massive underground temple to discover that all the artifacts have been stolen by a suspicious bearded man, and it's up to you to find and return them to their rightful place before something terrible happens. The catch, apart from the aforementioned mummies and whatnot, is that not only is the temple filled to the brim with traps as the title might imply, but it's also huge, and to proceed you'll need to find tools and equipment to unlock previously inaccessible areas in a bit of the ol' Metroidvania. Oh, if only we had some sort of bullhide weapon to go with our ensemble, then we could really get this party started... 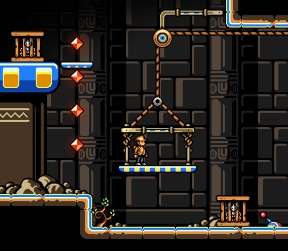 Playing Traps n' Gemstones is pretty simple thanks to its tidy interface. The buttons on the left side of the screen move our hero left and right, while the buttons on the right are used for jumping, rolling, and, eventually, attacking. A single hit will kill you, which gives you the opportunity of teleporting waaaaaaay back to the camp or just restarting from the entrance of whatever room you bit it in, but it also completely resets your highscore earned from gathering gems and coins. As you explore, you'll find, of course, the relics that will need to be returned to their pedestals, but also new weapons and other useful items. Some may be single-use, while others can only be used if you find ammunition for them within the same screen. If you're looking for a casual platforming adventure, Traps n' Gemstones should definitely be on your list. It lacks any real punishing level of difficulty, making it a good choice for players who enjoy platforms that don't feel like they're fighting you every step of the way, while also providing just enough skill-and-reflex-based challenges to keep you on your toes. You'll need to explore every corner of the map to unlock everything, which means a map that provides more useful information than the one we're given might have been helpful, but hey, suck it up. You're a dude in a jacket, not some futuristic bounty hunter lady with high tech equipment. 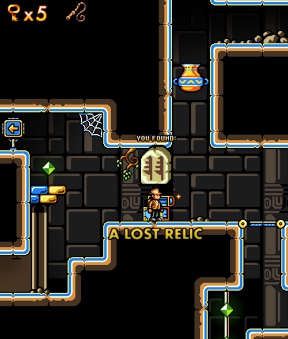 The way the game resets your high score upon dying feels unnecessarily strict, especially since the controls feel juuuuust floaty enough that you can get killed in really insulting ways when you slide forward a pinch too far, and add to that the baffling restriction that while gems and coins reset upon death, the optional golden symbols do not, so if you're trying to get a "perfect" run and you die even once, you're out of luck. It feels at odds with what is otherwise an extremely pleasant little game, something whose great use of colour and design makes it inviting to just about anyone of any age. You'll get blasted out of vases, trigger ancient mechanisms, take out rows of mummies with a single shot, and even swim with jellyfish. It would have been nice if there had been a greater ratio of complex mechanisms to rooms filled with basic enemies and gems, since the former is definitely more exciting than the latter, but Traps n' Gemstones is well designed enough that it doesn't wear out its welcome before it's over. It's the sort of game you hope sees an even beefier sequel down the road, but as it stands, Traps n' Gemstones is a rock solid and fun little action platformer that's a perfect fit for mobile devices of all sorts.

NOTE: This game was played and reviewed on the iPad Air. Game was available in the North American market at the time of publication, but may not be available in other territories. Please see individual app market pages for purchasing info.