Jimp and Jay Armstrong activate their Wonder Twin powers for Zombinsanity, which means this is one zombie game that's as adorable as it is hectic. You've just been awoken from cryogenic sleep to be informed that your space station is under attack, and you're the only one to fend off the apparently endless wave of zombie bats, blasters, doctors, chuckers, and much, much more. Use [WASD] to move and jump, and the mouse to aim and shoot, holding [E] to open your weapon selection wheel, and [spacebar] to interact with certain objects. You'll move from room to room in the station, fending off a wave of monsters in each one, and zombies will drop everything from ammo to cash to spend on new items when you kill them. If you're lucky, you can find survivors (or spend cash to clone them) that you can either assign to specific stations to generate power-ups, or just help mow down the oncoming horde. Just remember to keep moving, since when you die, it's permanent... you may keep your weapons and upgrades (not money), but you'll have to start over from the very beginning. Fortunately, you'll earn experience points based on how long you survived, and leveling up grants upgrade tokens to permanently increase your statistics. 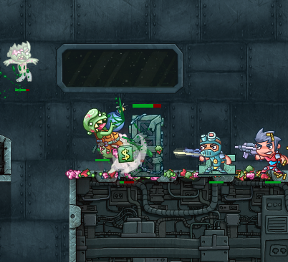 Zombinsanity is one of those games where the key to success is never to stay still, since zombies only deal damage if their attack connects rather than if you touch them. The same holds true for your survivor friends, since assigning them to a stationary point basically feels like a death sentence since they won't move even if they have eight zombies attached to their arms and face. Survivors in general don't feel as useful as they could or should, largely because they don't react fast enough to move around and stay alive like you can, basically rendering them meat shields and little else. Likewise, the barriers just don't feel worth maintaining when pinging around the stage like a bat on a sugar rush will get you faster, safer results after an upgrade point into a weapon or two.

Still, while not everyone will like the perma-death and repetitive nature of the gameplay, there's something distinctly charming about its creative zombie design and simple run-and-gun arena shooter-ish action. It's all very pell-mell chaotic, and since all weapons share the same type of ammo apart from your infinite pistol, it feels very streamlined. It might not offer enough variety to keep you at it long term, but if you're looking for the rapid-fire blasting of an arena shooter with some randomised flair, Zombinsanity is worth the bite it'll take out of your break. Hopefully, it's something we see expanded on in the future, since with objectives and more variety, it could be a serious contender.

Sometimes seems not to recognize my mouse button press. Sometimes the gun won't shoot, and often I can't change weapons. It's a bit of a problem.

played this game, unlocked all the guns, sat there saying 'what do I do with my money now.

REALLY wish could upgrade my clones to something more then pistols.

once you get up rank 20, its 'park your place and lets the clones shoot everything for half an hour

My biggest problem with the game is that you don't earn upgrade points, nor can spend them, unless you die....unless I'm missing something.

Otherwise, it's a really good game. I'm enjoying it.

Great game. As other people have pointed out, there's some awkward things about the transition for leveling up. I also found that after about level 15, if all my clones got killed, it was difficult to get through levels by myself because there's not enough ammo in levels, and you end the level about run out. Would have been nice if weapons lockers allowed you to purchase full ammo and/or several refills of ammo.