On the gritty, rain-soaked cobbles of Victorian London all is not well. Scotland Yard is preparing to activate a staggering and monstrous breakthrough in artificial intelligence codenamed the Basilisk. With nothing beyond its total surveillance capabilities, crime will become a thing of thing of the past — and so will your career as a master catburglar. Your only chance is to steal the Basilisk itself before it can become active, stealthily amassing a small fortune with which to augment your capabilities in daring midnight raids. But you only have a hundred days until the Basilisk goes active... and this is not your grandfather's Victorian England. Steam-powered uniformed security automatons clank as they trundle their masses of tarnished brass along punchcard-coded patrol routes. Whirling gyrocopter surveillance drones hover unsteadily about, searching for any trace of intruders and prepared to electrocute them without compunction. Centrally-networked panopticon lenses swivel their gaze across the room, and lethal 'hacker mines' lace the floor. Size Five Games' unique and eagerly-awaited indie stealth action steampunk-meets-cyberpunk hybrid The Swindle, the stakes couldn't be any higher and danger lurks around every corner. This compelling dystopian wonderland features the artistic talents of Michael Firman, the suspenseful musical stylings of Tobey Evans, and coding by Louise James, Tom Boot and Sophie Humphries of Clockwork Cuckoo. 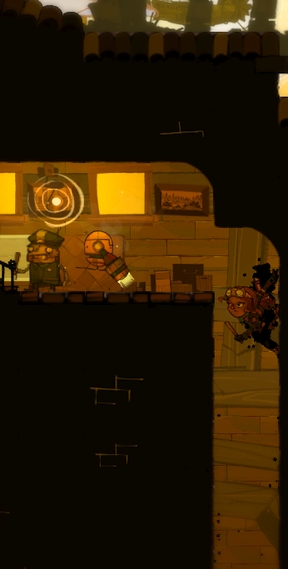 Your villainous headquarters is a rattletrap airship in orbit in Outer Space from which you'll launch pods to the sites of your nefarious crimes. Emerging on the dimly-lit grounds you'll want to trace a path into procedurally-generated mansions where all the loot is stored, taking careful note of the placement of various defense systems. The best route often varies; sometimes it will be through the front door, but sometimes scaling walls and bounding across the clay-shingled rooftops to an easier doorway is required, while occasionally sliding down and smashing in windows is your only prospect. Meager amounts of cash will be scattered around here and there, but the brunt of the haul is to be found in hacking the gigantic steam-powered mainframes if you can locate, get within breathing distance and hack into them successfully. Hacking mainframes and disabling mines is a knack which requires a bit of finesse and quick thinking: getting within range and holding [B] will start the process, but at intervals you'll have to press the corresponding [WASD] keys when prompted to match the directions described. Particularly with hacker mines it's tricky: just one wrong keypress is typically fatal. Still, I suppose it beats having a regular day job. Hacking into mechanisms is just one of many skills and abilities you'll be able to purchase with your ill-gotten gains back aboard your orbital airship between levels, and fortunately it's one of the more reasonably-priced options enabling you to start hacking quite early on. 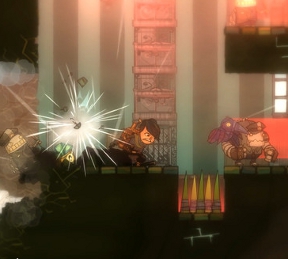 Using the [WASD] keys to maneuver, the [spacebar] to jump and [M] to attack when in range — though custom keyboard combination and USB gamepad options are also available — you'll pulse across hallways, dart along the rooftops, skid down walls and lay out the gearwork guards when necessary. Waiting breathlessly behind closed doors for just the right moment to fling it open wide and truncheon it back into a jumbled heap of cogs and springs definitely carries its own satisfaction. Gyrocopter drones can also be deactivated this way, though it will typically require two separate hits between which they'll slowly regain their senses and reorient. From the roving security bots to the gyrocopters to the sweeping panopticon optics, security units typically have a scope of vision demarcated by a yellow ray; get within range of that and they'll sound the alarm, security bots will immediately turn hostile and the police will be en route momentarily. Your only hope is to make it back to the pod before they arrive if you can manage it, which will find you safely back aboard your airship. If you're attacked by security bots, police, or even just happen to sustain a sizeable fall at any point, your character and any loot acquired during that mission will be lost and you'll become a new character back onboard your airship — with another day lost in the increasingly desperate countdown. 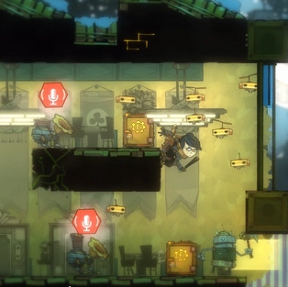 In fact the 'increasingly desperate countdown' is the most fascinating and innovative feature of all. Nearly set to release what was merely a phenomenal heist stealth/action game, a journalist mentioned to Size Five Games that players would typically just choose the safest and easiest paths, eke out tiny amounts of loot, and slowly accrue enough of a haul through countless missions to purchase all of the tasty, tasty upgrades. Result: Player investment was low, fun levels were middling, and the whole experience was pleasant but exceedingly grindy and pointless. Just as a then-unknown Notch discovered when developing a straightforward voxel painter into the smash hit Minecraft, Size Five Games realized more mechanism was needed in order to create a game that wasn't just playable, but actively enthralling and addicting. With each mission — win or lose — costing one day out of a hundred, the achievement of earning upgrades is matched by the ever-increasing urgency of the game's looming deadline. If you're going to make it, taking greater risks in your missions becomes a must. This in turn means that as the days wear on you'll either end up with raids that are heart-pounding spectacular triumphs or heart-plunging spectacular failures. You'll pillage the retro-futuristic Jacquardian mainframes, bound over or lay out the guards, and make it back to your airship with a sizeable haul, klaxons blaring and defenses gunning for you just moments before the police show up, or you'll wind up as just another hapless would-be felon unconscious on the floor and lose everything you'd manage to purloin. Either way, the sense of investment and involvement is back in a big way. With careful assessment and evaluation of The Swindler's formula, Size Five Games managed to develop a new gameplay dynamic that brought new meaning to their work... and crowds of players are cheering it on for that reason alone.

But does it succeed? Well, while we'd been about to mention some issues, as of this writing, Size Five Games released a new revision that rebalanced the price of the movement upgrades, fixed a few bugs and addressed laggy handing issues... turning down some of the graphics options, particularly the CameraDirt slider, ought to do it. So all that's left is to mention that The Swindle takes full advantage of your graphics capabilities, though with the graphics options turned down we had no problem whatsoever running it on a 2.4GHz laptop with no graphics card, and to mention that in addition to the current versions just out for Windows and Mac, releases for the PS3, PS4, PSVita, XboxOne and WiiU are in the works and the Linux beta is anticipated within a week. So get your heist on! The Swindler is too precious a haul not to nab.

When I click the Mac link, I'm taken to a game called "Tetrobot and Co".